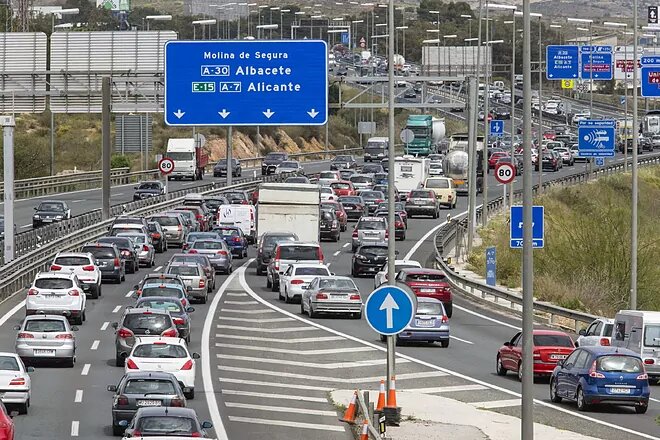 ACS, Acciona and Sacyr, for the macro road plan.

Transport launches the first 25-year concession, between Alicante and Murcia, of an investment plan that will amount to 5,000 million euros if it is successfully completed.

The private road plan is once again becoming a reality after being kept in a drawer for more than three years. The Ministry of Transport has been given the green light to relaunch public investment with a plan that could amount to more than 5 billion euros to modernise 2,000 kilometres of high-capacity roads.

The project defended by the Ministry of José Luis Ábalos, after overcoming resistance in Brussels and adapting the conditions of the Spanish contracting system, is an injection of optimism for the transport infrastructure sector, which was badly hit in 2020 by the fall in public tenders in the domestic market due to the impact of Covid.

Groups such as ACS, Sacyr, OHL, Ferrovial, Acciona and FCC, among others, have expressed interest in participating in the plan which, due to its characteristics, will also attract large infrastructure investment funds such as Ardian, Meridiam and John Laing, among others.

The first concession selected by the Ministry of Transport to test the public-private initiative will be the concession for the A-7 Mediterranean motorway between Alicante (Crevillente) and Murcia. Specifically, Transport has initiated the tendering process with the submission of the feasibility study for public information.

The terms of the concession contract for the execution, maintenance and operation of the section will serve as a model for the rest of the projects that the government expects to tender in a staggered manner.

The operation period will be 25 years. In the case of the A-7 section, the consortium in charge will be obliged to draw up the construction projects and execute the works for section B of the Murcia North arc, the third lane of the A-7 motorway between Crevillente (junction with the AP-7) and the Orihuela junction, both in the province of Alicante, and between the Orihuela junction and the Monteagudo junction (Murcia). The corridor is almost 40 kilometres long and has a construction investment budget of 200 million euros.

According to the Ministry of Transport, the contractor will be in charge of carrying out the replacement and major repair works to maintain the motorways in good service conditions during the 25 years of operation. In addition, it will carry out ordinary maintenance, road maintenance and operation of the road.

One of the novelties of the new concession contract is that the compulsory expropriation of the land required for construction will be carried out by the Administration.

On the other hand, the mechanism foreseen for remuneration to the concessionaire will consist of a monthly fee that varies according to the use of the road, road safety, availability and the percentage of the investment made.

Ábalos has managed to extend the terms of operation from 10 years to 25 years, and has also managed to ensure that investors do not assume the risk of expropriation, one of the obstacles that led to the bankruptcy of the radial toll motorways. But the minister has not relented on improving the profitability of the projects, which is limited by the current law of de-indexation of the economy.

According to this legal limit, the discount rate refers to the Spanish 10-year bond plus a spread of 200 basis points. At current prices, the yield would be 2.3%, which is very low for projects with construction and availability risks, according to the companies. «If profitability is not improved, it will be more difficult to attract the interest of investors», warned Seopan a few days ago, which proposes as a solution that public contracting bodies should be the ones to set the discount rate, in view of the real costs of the financial market.

The government is of the opposite opinion and is sure that there will be investor interest in the projects, which will be launched in stages.

The relaunch of the road plan, which is an adaptation of the old Extraordinary Road Investment Plan (PIC) that the former president Mariano Rajoy presented in August 2017, relies entirely on private initiative.

Although some members of the government have spoken out against public-private partnerships, Ábalos has managed to push through the private plan after roads have become the poorest brother of the different modes of transport due to their environmental component. In particular, Spanish roads have fared badly in the distribution of the EU’s recovery mechanism, better known as Next Generation. Spain submitted projects worth more than 2 billion euros in 2020, of which 1.1 billion euros were excluded from the list, related to new actions, pavements and improved lighting.

The government’s lack of interest in concession schemes is reflected in the 2020 tender balance. In total, investments of 50 million euros were tendered through this type of contract, of which only four million (Ports) corresponded to the central government. Last year was a black year for public works in general, with a fall in contracting of 43%, to 6,350 million euros. Forecasts point to only a slight upturn this year thanks to the extraordinary contribution included in budgets from the EU recovery mechanism for mobility projects.

By boosting the concession system, the government is overcoming these budgetary restrictions. In principle, Transport wants to tackle the plan project by project as the work matures, although according to the sources consulted, more than 20 major corridors are already being considered. In addition to the Levantine corridor that has been launched, other routes are on the starting ramp, with a total investment of some 1.8 billion euros. These include the A-30 ring road around Murcia, new sections of the A-7 through Castellón and the dual carriageway between Burgos and Aguilar de Campoo (Palencia).