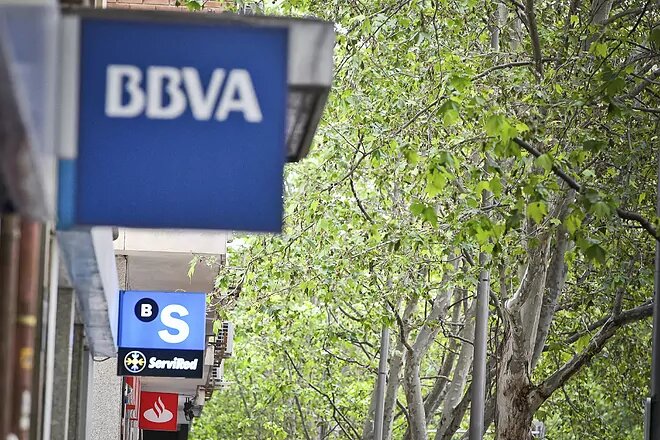 BBVA, Santander and Sabadell, the biggest beneficiaries of the fall in provisions.

The outlook for the European banking sector has improved in recent months and this will translate into a fall in extraordinary provisions by banks.

This is anticipated by analysts at Autonomous, who in a report place Santander, BBVA and Sabadell among the ten banks on the Old Continent that would benefit most from a potential reduction in provisions.

The change in the macroeconomic scenario, in which an upward trend in inflation is expected, has led the analysis firm to rethink its assessment of the banking sector. Growth forecasts have improved and, as a result, so has the outlook for the evolution of household and corporate credit quality, which will lead to a reduction in banks’ provisioning effort in 2021 and 2022, according to its calculations.

Autonomous’ estimates last summer put the average provisioning effort that banks would need to make in the three-year period 2020-2022 at 226 basis points of capital. Now, in the light of the new macroeconomic forecasts, this amount has been reduced to 191 basis points. And this is taking into account that Autonomous’ projections are among the least optimistic, as the drop is even more accentuated if one compares the central scenario for provisions published by the European Central Bank (ECB) following its vulnerability review of the sector (200 basis points) with the amounts that banks should provision according to the consensus of analysts included by the authors in the report (138).

«Can provisions be a positive surprise in 2021 and 2022 when both problem assets and bankruptcies will be on the rise?» asks the analyst, who replies that yes, thanks to the current accounting standard (IFRS9), which calculates the provisioning effort under an expected loss criterion.

With this system, unprecedented in Europe at a time of crisis, «provisions always start to fall before defaults have reached their peak,» says the report, which also notes that, throughout 2020 and so far in 2021, the sector has already allocated 33 basis points of capital to unallocated advance provisions, which could be reclassified in the future, if necessary, and which allow banks to have an additional cushion for the remainder of the recessionary cycle.

Spanish banks
Autonomous’ analysis anticipates a 20% drop in bank provisions in 2022 and how this would affect the sector’s profits. On average, the results of the 34 European banks examined would rise by 8%, although the authors of the document foresee a marked dispersion among the different banks.

Santander would be one of the European banks that would see its profits grow the most if it were to face lower provisions. Specifically, it is second only to Portugal’s BCP, with a 20% improvement in its results.

Another Spanish bank, BBVA, ranks fifth among the institutions with the greatest capacity to revise its profits upwards in an environment of lower provisioning effort. The group chaired by Carlos Torres would increase its income statement by around 15% in such a scenario.

Sabadell is the third Spanish bank in the top 10 European banks with most room for improvement. In the case of the Catalan group, profits would increase by around 10%.

The fourth Spanish bank included in Autonomous’ analysis is CaixaBank, which is the only Spanish bank below the European average, with a positive impact of around 5% on its profits.