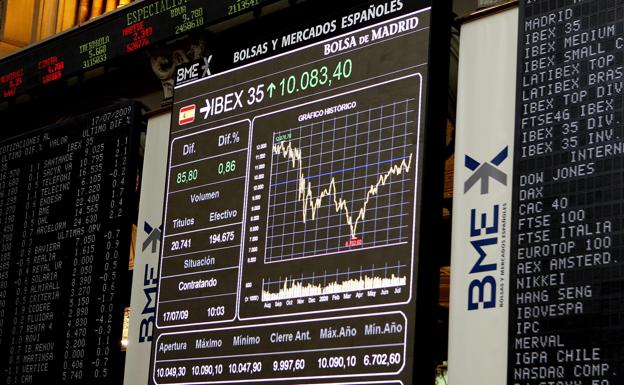 CIE, Solaria, Cellnex, Iberdrola and 22 other firms have already recovered their pre-Covid levels.

The return of the American institutional is behind part of the rise.

The November rally of 8% has taken the Ibex 35 to levels not seen since the knife drop in the second week of March. The market already looks set for a progressive economic recovery thanks to the vaccines, but the way some companies have discounted it, with purchases far above the national market average, puts them directly at levels prior to the stock market crash that started on the first of three black Mondays on 24 February.

Behind the rise in securities such as Cellnex or Telefónica this Tuesday, 9% is the return of the US institutional, which left in March and is now returning. Even so, the Ibex’s November rally is 10 percentage points lower than the EuroStoxx 50, at up to 18%, and must rise another 8% to erase the market crash. The Ibex, on the other hand, must revalue by 22% to achieve this.

Up to 26 securities in the Continuous Market have erased the Covid-19 crisis from their history; seven of them are members of the Ibex 35, such as Solaria, Pharma Mar, Siemens Gamesa, Viscofan, Cellnex Telecom, CIE Automotive and Iberdrola. In all cases, except that of the car parts manufacturer, they are defensive companies that had already been acting as a refuge for investors. Only CIE, thanks to its portfolio rotation into the cycle of the last few weeks and its third quarter results which beat expectations, managed to make up for the crash and trade 5% higher than the day before the correction which began in February. In any case, it still suffers losses of 2% over the year, which is remarkable considering the magnitude of the current crisis.

The company led by Antón Pradera has left pending the presentation of its new strategic plan 2020-2025, planned for the first months of this year in view of the outbreak of the pandemic. «Although it will be a complicated year (we foresee a 30% fall in ebitda and 40% in net profit), we see a clear potential for revaluation that we hope will materialise with the recovery of the sector expected for 2021», stated Intermoney. In November alone, the firm recovered 22% on the stock market. Its comparable national company, Gestamp, posted a 33% increase in the same period and is another company that managed to trade at pre-Covid levels, 3% higher.

Of the six Ibex companies that beat the bar set by Covid in February, Solaria and Pharma Mar, the two most recent additions, stand out. The solar panel company, which has clearly benefited from the European reconstruction plans focused on green energy, is the fastest growing company of the year in the Ibex, with a 162% gain. Compared to the levels of 21 February, it is trading 83% higher, which only reinforces its trend towards historical highs, close to 18 euros per share. The case of Pharma Mar is different, as it corrects by almost 34% from the ceiling it reached in mid-October, above 134 euros. For the time being, it is holding its rate, 74% above pre-Covid levels.

For its part, Siemens Gamesa, at its highest level of the year, has long since erased the crash and is trading at 74% above preCovid levels. The wind turbine manufacturer, which is up 77% by 2020, is going through a dream exercise in the heat of the clean energy boom, post-pandemic recovery programmes and ESG investment, which has led many industry analysts to admit that the energy transition has led the company to bring forward a year or two of business. Iberdrola has also managed to close the gap opened by the coronavirus, although less briskly than the Spanish-German company. The electricity company, which on 12 November once again reached a record high of 11.44 euros, boosted by the latest announcements of investment in clean energy and its ambitious plan until 2026, has put an end to this crisis on the stock market. Experts believe that this trend will also be passed on to profits, which will exceed 4 billion in 2022.

Finally, Viscofan and Cellnex have also managed to avoid the pandemic with guarantees. The former, linked to the food sector, has been one of the stocks that has performed best during the crisis, and honouring its defensive nature it is trading 16% above pre-Covid levels and is showing annual profits of 23%. Cellnex, a benchmark in the European telecommunications infrastructure business following the agreement with the Hong Kong operator CK Hutchison, traded at 10% above its level on 21 February and posted 40% for the year.