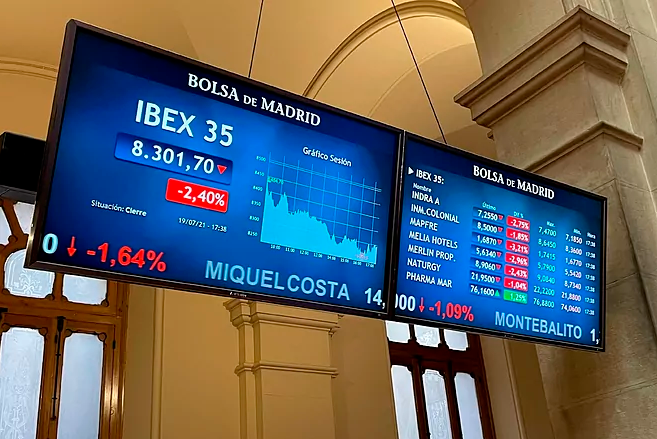 Doubts are still lingering among European investors. After the initial rebound, advances are moderating in the Old Continent’s stock markets and barely compensate a part of the severe setback of yesterday’s session due to the fear that the advance of the Delta variant will slow down the economic recovery. The Ibex is trying to break the streak of five falls and move away from the lows since March.

European stock markets are trying to regain calm after Monday´s sell-off, which caused falls of more than 2% in the main markets. Specifically, the Spanish stock market fell yesterday to its lowest level since March, dragged down by widespread profit-taking in equities, doubts about the impact of inflation and the increase in contagion on the course of the economic recovery. Today is a rebound, albeit moderate, led by cyclical stocks, which were the worst hit on Monday.

In the advances, the two selective socimis Colonial and Merlin stand out. Part of the banking sector also tried to pull the Ibex up, despite the new fall in debt yields. Bankinter and Sabadell showed the biggest gains, and BBVA regained the 5 euro per share level for a few moments, while Santander was not affected by the cuts.

Repsol also rallied with the rebound in oil prices, which yesterday suffered the biggest fall of the year.

«The technical aspect of many stocks and indices has deteriorated a lot in recent days, so further declines cannot be ruled out. If so, we would begin to take small positions in the most cyclical sectors of the market, including the leisure and tourism sector, which is the one that is being most punished at the moment by investors,» Link Securities points out. Meliá stands out as one of the most bearish stocks of the session.

The rest of the European stock markets are also trying to rebound in line with the Ibex as they wait for Christine Lagarde’s words after Thursday’s ECB meeting to give some clue about monetary policy.

This year, one of the permanent focuses of investors is the debt market. After yesterday’s heavy buying in the U.S. bond market on fears about inflation and the spread of coronavirus infections, there is some respite today. The US ten-year bond yield remains slightly above 1.20%. The yield on the German bund stands at -0.40% and that of the Spanish ten-year bond at 0.27%.

The price of oil, which plunged more than 6% yesterday due to fears that the economic recovery will be slowed down and due to the production increase agreed by OPEC+ producers, is not out of sight either. Today, there is a slight rebound, with Brent crude at 69 dollars a barrel and West Texas crude, the US benchmark, at 67 dollars.

Pending the European Central Bank (ECB) meeting on Thursday, the currency market remains calm. The euro is trading on the edge of 1.18 dollars and the pound is exchanged for 1.36 pounds. The bitcoin continues to fall and is already trading below 30,000 dollars. Gold, on the other hand, strengthens above the level of 1,800 dollars per ounce.

Investors will also be keeping an eye on the earnings season. Today, the figures of the Netflix content platform will be released. So far, 9% of the companies in the S&P 500 have published their accounts. They have exceeded 91% in earnings per share (EPS) and 86% in revenues.