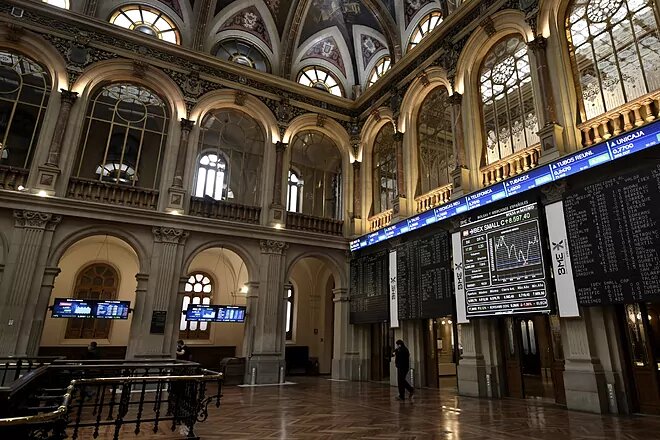 The Ibex loses 8,300 points without losing sight of debt.

The Spanish selective subtracts more than 1% at the start of the day and loses the 8,300 points with an eye on the US 10-year bond that yesterday rose again close to the highs of the year. Today could see further changes with the US employment report.

The evolution of public debt is crucial for the markets, and more specifically, that of the US 10-year bond, which yesterday lowered its price and shot its interest rate up to 1.547%, close to the highs of the last year, which it reached last week at 1.61%.

This reaction came after Jerome Powell, chairman of the Federal Reserve (Fed) downplayed the recent rise in the cost of financing to record levels and inflation levels, which removes the options of intervening to stop these interest hikes, causing the dollar to soar and concern to return to the markets.

All of Europe in the red

In fact, Powell’s intervention last night provoked a bearish sign on Wall Street that today extends to all of Europe. The Ibex opens with falls of more than 1%, in line with the rest of the indices on the Old Continent, and loses 8,300 points. This puts this level at risk and could end the week in negative territory, as the accumulated rise since Monday is reduced to less than 0.5%. It would thus break its good run, after two weeks in positive territory, in which it had recovered 2%.

Diegor Morin, analyst at IG says that «the Ibex should close above the 8370 resistance level to continue its bullish tone. This is a level that it has come up against in recent days and has not found enough buying demand to continue the conquest of the high of recent weeks,» he says.

The protagonists of the day

Some of the most bullish stocks of the year, such as those linked to the tourism sector, are at the bottom of the market. In last place is IAG, down 3.7%, followed by Amadeus, down more than 2.8%. Amadeus corrected from yesterday’s March highs of 2.51 euros. Despite today’s cut, the company is the week’s biggest gainer, up 8% and up more than 34% for the year.

Along with the travel sector companies, PharmaMar is another of the most bearish stocks of the day, down nearly 2%. It continues the downward trend of the last few sessions and is now in its fourth day in negative territory, losing more than 11.5%. Nevertheless, it is up more than 42% for the year and leads the Ibex gains in 2021.

On the other hand, only three companies are in the red. Two of them are clearly defensive: Viscofan and Almirall, while Telefónica is also among the day’s best performers, with a gain of close to 0.5%. The operator is thus close to the highs it set on 13 January, at 3.97 euros.

In the recommendations section, Berenberg has raised its target price for Bankinter to 5.4 euros, from the previous 4.1 euros. Even so, Bankinter shares corrected close to 0.8% on the stock market, to 5.5 euros.

Today’s employment report from the world’s largest economy at 2:30pm will be decisive and could have a major impact on the debt market. Non-farm employment growth is expected to pick up to 200,000 (up from the previous rise of 49,000) and the unemployment rate is expected to hold steady at 6.3%. In addition, annual average hourly wages are forecast to rise by 5.3 per cent, up from 5.4 per cent previously).

This employment report comes at a key time when the dollar is trading at a three-month high, which is taking its toll on the euro, which is down 0.12% to $1.1952. The pound is also down and is trading at 1.38 dollars.

In the commodities market, oil continues its particular escalation and soars again by more than 1% after OPEC and its partners decided to keep supply frozen until April despite the reactivation of demand in recent months. The price of a barrel of Brent, the benchmark in Europe, is close to 68 dollars and West Texas, the benchmark in the US, stands at 64.8 dollars.

In the Spanish debt market, the risk premium rises to around 70 basis points, with the interest rate on the ten-year bond at 0.407%.