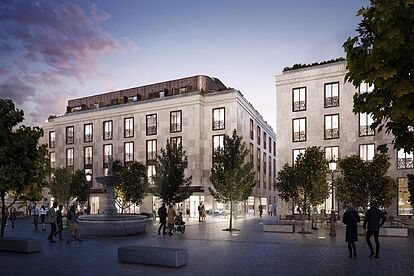 Millenium to invest 500 million to climb to the hotel podium

The Real Estate Investment Trust (SOCIMI) owned by the Isidro family, José María Castellano and Leopoldo del Pino will increase capital by 250 million to, together with the associated leverage, close new acquisitions.

Millenium, a hotel Real Estate Investment Trust focused on the premium segment, wants to double its size. With ten assets valued at 485 million at the end of last year, including capex pending execution, the group will increase capital by 250 million which, including the associated leverage, will allow the firm to invest another 500 million in assets and become a leader in the sector, largely dominated by HIP (Blackstone) and with Bankinter’s Socimi, Atom, as its main rival.

As a roadmap, and thanks to the expansion, Millenium expects to close five or six operations this year with a total committed investment of close to 250 million, between the disbursement for the asset and the capex required for its transformation. To this end, it is analyzing investment opportunities for 1,000 million, explains the group’s president, Javier Illán.

The executive points out that, being placed with a volume of 1 billion, allows the Real Estate Investment Trust to have greater liquidity and the option of giving entry to sovereign or institutional funds.

The fact that much of its portfolio was under construction has allowed Millenium to weather the Covid storm better than its rivals, as the group’s president, Javier Illán, explains. «At the time of the pandemic, of the group’s ten hotels, seven were under construction. We have taken advantage of this to make progress on the works, which allowed us to open the Radisson Collection Seville on June 18 and will allow us to inaugurate the Radisson Collection Bilbao in mid to late September,» he adds.

At the end of 2020, the Socimi invoiced 8 million from the rents of the Vía Castellana hotel, the Lucentum in Alicante and the Meliá Bilbao hotel and the income derived from the golf courses, since the rest of the assets were still in the conversion process. Despite everything, the figure grew by 77%, given the contribution of the Meliá Bilbao hotel and the golf courses, which in 2019 only contributed to the accounts for a few months. The group closed with a loss of 14.9 million euros due to lower asset revaluation.

The company’s main shareholders are Ibervalles, a company controlled by the Isidro family, with 25.14% of the capital; the British investment firm Pelham Capital (9.93%); Alazady España, controlled by José María Castellano, with 5.6%; and Siemprelara, owned by Leopoldo del Pino, with 5.6%.

Regarding growth, Illán recalls that, given the group’s requirements in terms of position and asset management possibilities, its field of analysis is «narrower». Nevertheless, it has operations under study for 1,000 million euros. As for destinations, the group wants, first, to grow in the main Spanish cities, which are destinations for quality tourism, and then to make the leap to Portugal, in cities such as Lisbon and Porto, and in a next step to enter Italy and Greece.

The group does not intend to rotate assets, except on rare occasions and provided that they are not strategic or have completed a cycle. For example, the meeting voted on the option to transfer to one of its shareholders, the Isidro family, Millenium Hotels C220 -the holding company of Hotel Vía Castellana- for 43 million euros.

In any case, this operation will not be closed before February 2022, which is when the group could divest the asset without losing the tax advantages that regulate the Real Estate Investment Trusts.