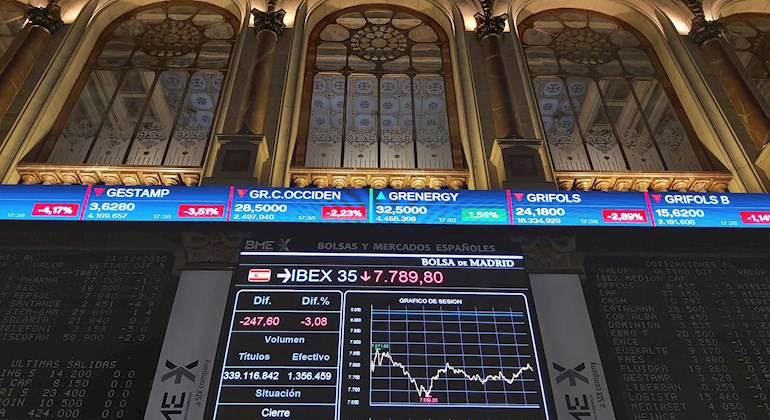 The Ibex hesitates with the 8,800 level and with its full of rises in August

The truce persists in the markets, although with an even more restrained sign than in the previous session. The Fed adopts a more aggressive tone and the dollar responds to the rise. The Ibex tries to maintain its full August gains and overcome the 8,800 point mark.

The trickle of corporate results continues in Europe, the macro agenda includes several highlights on both sides of the Atlantic, and central banks are back in the limelight. The Bank of England today unanimously agreed to leave interest rates unchanged. The doubts lie in the timetable for the withdrawal of its stimulus policy, in view of the upturn in both inflation and growth in the United Kingdom. The outcome of the Bank of England meeting was preceded by a more aggressive tone used by the Federal Reserve, specifically by Richard Clarida. The Fed vice-president questioned the predictions about the timing of the first rate hike in the United States by pointing out that the conditions for raising rates could start to be met by the end of 2022.

Interest rates on US debt respond to the rise, and the dollar gains momentum with the new more aggressive tone used by the Fed. The euro abandoned the assault on the 1.19 dollar level of previous days and retreated to the 1.18 dollar level. The pound, before knowing the outcome of the Bank of England meeting, touched intraday lows below 1.39 dollars.

Monetary references share the spotlight with macro data on the day’s agenda. After a few days with weaker-than-expected figures, the 4.1% increase in industrial orders in Germany in June was a surprise today, more than double the 1.9% expected by the market. On Wall Street, the US weekly unemployment figures were released, a prelude to tomorrow’s official employment report. Today’s figure was in line with expectations, at 385,000 jobless claims.

The lull in Asia keeps Europe calm, and in a Spanish stock market that is hesitating to continue with the full of gains it has recorded so far in the month of August. The bearish break has hardly been taken advantage of by the bulls in the two previous sessions, in which the Ibex has crashed against 8,800 points, limiting its final advances to 0.16% and 0.23%. The Spanish selective index is once again hesitating to break the 8,800-point level.

The benchmarks are blowing against Repsol. Yesterday it already lost 1.28% at the close, and today it is again among the laggards of the Ibex. The Brent barrel is struggling to stay below 70 dollars, and analysts at Bernstein and Jefferies have downgraded the oil company’s potential. The Ibex’s two steel companies, ArcelorMittal and Acerinox, are also suffering today, and not only because of the slowdown in the commodities market. The references in the form of results in the sector throw a cold water pitcher, such as that of the Finnish Outokumpu.

Utilities show their defensive profile in the midst of the doubts that the market is carrying today, and banks are struggling to maintain their upward momentum, despite new signs of support from analysts for BBVA, and the rate hike approved in Brazil that Santander is receiving.

PharmaMar stands out in the chapter of falls from the opening. The biotech company suffered the largest valuation downgrade of those adopted by Stifel since January 2018. Its shares erase the gains accumulated so far this year and puts at risk the support of 70 euros per share.

The other European stock exchanges also minimize their changes, awaiting the macro and monetary news that the day’s agenda holds. Corporate earnings are beginning to ease in the final stretch of the results presentation season, accounts that have been key to boosting the pan-European Stoxx 600 index to new all-time highs.

Today’s results were mixed. The French bank Crédit Agricole rises on the stock market after doubling its profit, and the German giant Siemens rises on a new improvement in its business forecasts for the year as a whole. The publication of results also triggered significant corrections in stocks that have been soaring in recent times, such as the German companies Adidas and Zalando. The declines after results were repeated in shares such as those of the Finnish steel company Outokumpu and the German chemical company Bayer.

The doubts in equities extend to fixed income. The more aggressive tone used by the Fed vice-president has brought US debt interest rates off their lows, but has a more limited impact in Europe. The interest rate on the ten-year US bond rose to close to +1.20%. In Europe, the negative German bund yields are now falling below the -0.50% threshold, and the yield on the Spanish ten-year bond is close to +0.25%.

The dollar’s firmness this time does not prevent a new bitcoin reaction. The cryptocurrency reacts and returns to the $40,000 barrier, which it has been hitting all week. Gold, meanwhile, reacts timidly downward to the Fed’s messages, closer to the threshold of $ 1,800 per ounce.

Geopolitical tensions in the Middle East cushioned the hints of a correction in the price of oil. The Brent barrel is struggling to hold above 70 dollars per share, and the West Texas barrel, the US benchmark, is trading at 68 dollars after its recent falls.