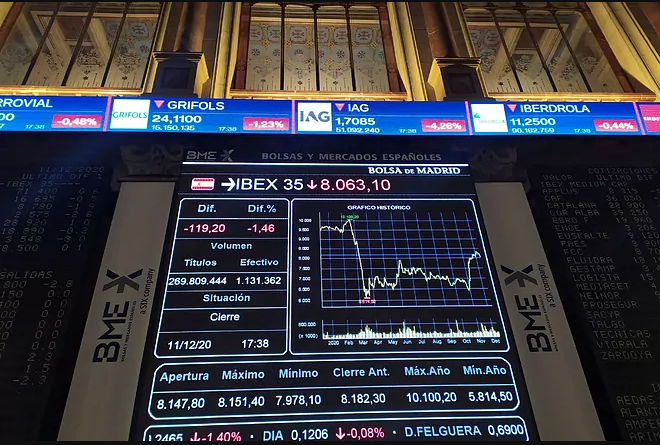 The Ibex is marked by falls, the slope of the Brexit and the ‘witching hour’.

The major European indices are trading moderately in a day marked by the Brexit trade, the US stimulus talks and the quadruple ‘witching hour’. The Ibex breaks away with cuts, but maintains its 8,100 points…

The European stock markets are trading with moderate progress pending the Brexit negotiations when the deadline for reaching an agreement is about to expire. In addition, the exchanges are facing one of the relevant events of the quarter today: the expiry of futures and options on indices and stocks, the so-called quadruple witching hour. This is an event that usually adds volatility to the markets and this year will be special because of the situation generated by the Covid-19 pandemic.

Investors are also waiting for a stimulus plan for the US economy to be put in place, with a budget of around $900 billion, which yesterday brought Wall Street back to an all-time high.

With regard to the Brexit, the markets have in recent days opted for the option of a break agreed following the progress made in the talks, but the European Parliament warned yesterday that it will not ratify an agreement before the end of 2020 if it is not ratified before Sunday.

The Ibex is once again lagging somewhat behind the rest of the European markets, although it maintains its 8,100 points and is on track to save the week with gains compared to the 8,063 points it closed on Friday.

As is usual in sessions where caution is imposed, investors take positions in some of the stocks that have performed best over the year, such as PharmaMar, Siemens Gamesa, Cellnex and Iberdrola.

In negative territory today, sales in tourism sector stocks such as IAG, Amadeus and Aena have been imposed. Enagás is also listed on the stock exchange. Today is the last day for investors who want to be entitled to receive their next dividend to buy shares. The gas transport company is one of the most profitable companies in terms of dividends in the Ibex, exceeding 7%. On 23 December it will pay 0.67 euros gross per share and the next one will be in July.

After falling into negative territory this week, the yield on the Spanish ten-year bond rises to 0.05%, although the risk premium remains stable at just over 60 basis points.

With currency traders watching the Brexit and US stimulus talks, the dollar is recovering slightly from the recent declines. The euro is exchanged for $1.22 and the pound is down 1.36.

Also a slight correction in the oil price after recent highs. The Brent barrel is exchanged for $51 and the West Texas type, which is a reference in the United States, is quoted at $48.

WHAT IS THE QUADRUPLE ‘WITCHING HOUR

The expiration of index and stock futures and options, the quadruple witching hour, occurs on the third Friday in March, June, September and December. On these dates, and at a certain time, investors decide whether to let their derivatives expire or exchange them for the next maturity (roll over). Investors usually change contracts during the week of the maturity, so that at maturity about 5% of the positions are reached.