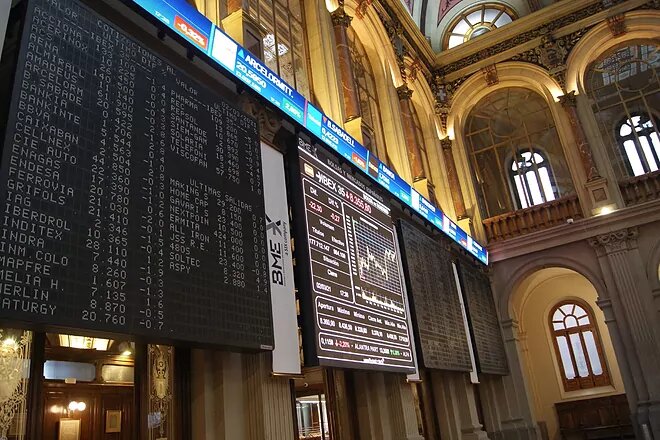 The Ibex slows again in a session of contrasts.

Optimism revives in the markets, including record highs in the German Dax. The Ibex, on the other hand, lags in a day of great contrasts between several of its most important sectors.

Investors continue to monitor the evolution of debt interest rates, with the focus on US bonds, in order to avoid major setbacks in the recovery. New trillion-dollar fiscal stimulus in the US and progress on vaccines raise hopes for a faster recovery. UK and US vaccination forecasts give cause for optimism. London expects to complete vaccination of the entire adult population by early summer, and Washington has assured in the last few hours that vaccination for all adults will be available by the end of May. The eurozone has much less optimistic timescales, although it is making progress in its plans to reopen.

While waiting to see how these deadlines evolve in practice, analysts are not only looking to the medium term. The day’s agenda includes a battery of macro data on both sides of the Atlantic. In Europe, the final composite PMI for the euro zone rose to 48.8, closer to the 50 point barrier that separates contraction from growth, and above the 48.1 of the initial estimate, the same figure that analysts were expecting. In the US, the three days of labour market data will begin today with private sector job creation figures. Forecasts point to the creation of some 177,000 jobs in February, although the most anticipated data will come on Friday with the official employment report.

The US labour market data could disrupt the current lull in the government bond market. US bond yields are slightly above 1.40%, still far from the one-year highs reached at the end of last week, when they touched 1.61%. In Europe, the interest rate on the German bund is close to -0.30%, while the yield demanded on the Spanish bond is above +0.30%, after touching +0.50% last week.

Asian equities have taken advantage of this lull to resume their gains this morning. Wall Street points to the upside, in a sign that is repeated in Europe. The Spanish stock market joined the gains with determination during the first hours of the session. In its advance it reached 8,466 points, new highs for the year. But the subsequent pullback erased the 8,400 point level again, as happened yesterday.

Cyclical stocks are benefiting from the upturn in optimism about the economic recovery. Among the most bullish stocks on the Ibex, ArcelorMittal stands out today. The steel giant is above 21 euros per share. Acerinox joined the gains, as did another industrial company such as Cie Automotive. The company has also increased its weight in the alliance with Mahindra to 60% in order to grow in Asia.

The correction in the rise in debt interest rates has moderated the stock market rise of banks, the sector that has benefited most from the evolution of debt. But it has not prevented new signs of optimism from analysts such as those at Morgan Stanley. The US firm has raised the upside potential of Santander, which today shot up to the three euro per share level for the first time in a year. CaixaBank is trying to consolidate the 2.8% rise achieved yesterday, the highest on the Ibex, with a Credit Suisse report as an incentive to buy.

The less defensive profile that investors are adopting today leaves a sector such as utilities lagging behind. The brake is particularly affecting renewable energy companies such as Iberdrola, Siemens Gamesa, Solaria and Acciona, in another day of correction for the sector caused by downward pressure from EDP Renovaveis, as a new threat, capital increases, emerged and institutional investors’ euphoria for the sector waned.

The trickle of results is losing momentum as the European sessions go by, but still leaves figures such as those of Fiat Chrysler and the French PSA. Stellantis, the company resulting from the merger of the two carmakers, is again rising on the Milan Stock Exchange. Stellantis’ rises are spreading to other stocks in the sector such as Renault and Volkswagen. The debate on the valuations achieved by renewable energy companies is reignited by the capital increase in EDP Renovaveis. The placement of a 10.1% stake in the Portuguese company, which soared 225% between its lows of last year and its recent highs, was carried out at a discount of 9.3%. Its shares are close to 10% down on the Lisbon Stock Exchange, their biggest fall since the collapses of March 2020.

The companies most closely linked to oil receive new bullish references. The price of crude oil resumes its climb above 63 dollars for Brent crude and 60 dollars for West Texas crude, the US benchmark. Analysts expect OPEC countries to be more flexible in their current production cuts as demand for crude rises, a scenario that could be countered by a faster recovery thanks to vaccines.

The recent rally in oil and other commodities contrasts with gold’s weakness. The precious metal is holding near eight-month lows, struggling at times to break through the 1,700 dollar an ounce level. Rising interest rates on debt and growing competition from investment alternatives such as bitcoin are working against it. The cryptocurrency is again accelerating its advances, above 50,000 dollars.

Among the ‘traditional’ currencies, the dollar has seen its recent rises slowed by the new stimulus measures and the progress in US vaccination. The euro is close to 1.21 dollars and the pound is approaching the 1.40 dollar level.