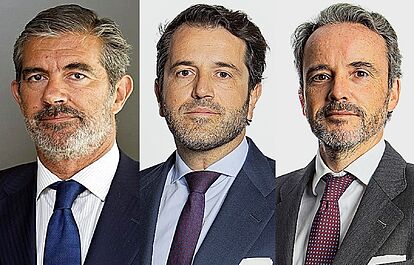 The bank appoints new heads, after Gutiérrez-Orrantia took over EMEA duties a couple of months ago.

According to an internal communiqué from the firm to which EXPANSIÓN has had access, Pedro López-Quesada will be the new chairman of this business of the U.S. giant in Spain and Portugal, while Jorge Ramos and Álvaro Revuelta will be the new co-managers.

Bill Van Dyke continues to be responsible for Citi’s business in Spain and José Meseguer remains in charge of the Financial Institutions area, completing the organization chart.

These movements are a reaction to the promotion of Ignacio Gutiérrez-Orrantia as head of BCMA at EMEA level. The U.S. institution has opted for the internal promotion of bankers with extensive experience who are moving higher and higher up the bank’s ladder.

In fact, López-Quesada is an in-house man. The banker has spent his entire professional career, more than 30 years, at Citi and was until now vice-president (vice-chairman) of this same business, so he knows how it works.

Along with this work, López-Quesada is responsible for the coverage of some of the large clients, something he will continue to do.

In February 2020, both were appointed co-head of Investment Banking in Spain and Portugal. While Ramos specializes in Infrastructure, Revuelta has a greater focus on Telecommunications, Industry, Transportation and Private Equity.

Citi has made Spain one of its strongholds in recent years, almost systematically reaching the top of the fee income rankings.

In the first half of 2021, Citi has announced its participation in the three major takeovers in the market (Naturgy-IFM, Solarpack-EQT, Euskaltel-MásMóvil), in three sale transactions (Cobra-Vinci, Helia1-Northland Power and XElio-CTG) and two purchase transactions (Platinum-Urbaser, Befesa-American Zinc Recycling). It also played an important role in the IPO of Acciona Energía and the expansion of EDP renovables.

The performance has led to several Spanish bankers being promoted internationally in the bank. In addition to Gutiérrez-Orrantia, Paco Ybarra is the head of Institutional Clients Group; Manuel Falcó, the global co-head of Investment Banking; and Fernando López Muñoz, the head of Private Banking for Southern Europe.