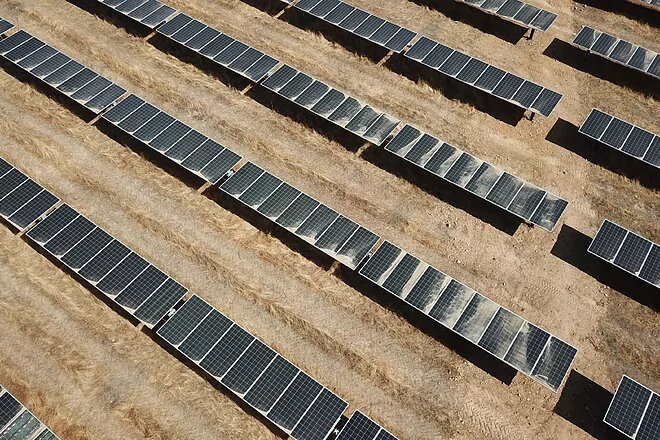 Endesa is challenging Iberdrola and Naturgy with a macro-buyout of renewables.

Spain’s largest electricity company in terms of customers also wants to beat the other two energy majors in the new renewables race and is accelerating its acquisition offensive.

Endesa, through its renewables promotion subsidiary Enel Green Power España (EGPE), has acquired a portfolio of 519 megawatts (MW) of photovoltaic projects from Arena Power. The transaction, including the associated investment, is valued at 350 million euros, according to sources in the energy sector.

It would be Endesa’s second major renewable energy purchase operation since 2019, when it acquired a portfolio of photovoltaic projects of around 1,000 MW from the Prodiel group, a company chaired by Ángel Haro, president of Betis and whose shareholders also include the Godia family.

The deal with Arena would be Endesa’s biggest in the new race that has been unleashed in recent months in Spain in the renewables sector, which is now a hotbed of moves by international funds and oil companies.

Endesa’s acquisition would also be the largest purchase by a large electricity company in this wave. With it, the group, whose chief executive is José Bogas, is positioning itself against Iberdrola and Naturgy, the other two major electricity companies in Spain. The portfolio acquired by Endesa consists of eleven projects under development in Huelva. Construction is expected to begin in 2022 and operations in 2024. These facilities are in addition to the recent start of work by EGPE on its first solar farm in the Huelva capital, San Antonio, with 30 MW of capacity and an investment of 18 million euros, as explained by Endesa.

The eleven projects that make up this operation are located in six towns in the province of Huelva. Specifically, La Palma del Condado, Villarrasa, Gibraleón, Trigueros, San Juan del Puerto and Beas.

All of them will evacuate the energy generated, which is equivalent to the electricity supply of some 305,000 homes, via a single transmission line that will connect to the Palos substation. This substation is located in the Huelva Industrial Park, one of the largest energy-consuming business agglomerations in Spain.

This substation serves the energy needs of the chemical, oil and metallurgical complex in Huelva, which is home to 18 companies and 19 large facilities. Endesa’s idea is to direct the flow of energy generated by the photovoltaic plants to a newly created hydrogen plant to supply this industrial area. It is estimated that the projects purchased by Endesa represent an investment of around ¤350 million, including the purchase price and the cost of construction and start-up. They will generate 1,250 jobs during construction and 26 during the subsequent operation and maintenance phase.

Endesa’s green hydrogen production project has already been submitted by the group to the Ministry of Ecological Transition and Demographic Challenge, as part of the package of applications made by the company to obtain aid under the Next Generation plan.

With the purchase of photovoltaic plants and the new projects, Endesa is accelerating its commitment to renewables and its process of eliminating coal-fired plants. EGPE has an installed renewable capacity of 7,800 MW and a project portfolio of 41,800 MW in Spain at the end of 2020.

The installed capacity is distributed in 4,745 MW of hydroelectric plants; 2,422 MW of wind energy; 609 MW of solar energy; and 3 MW of other renewable sources. It is thus fighting for the leadership of the energy transition in Spain (see attached information). Its 2021-2023 strategic plan envisages the development through EGPE of 3,900 MW of new renewable capacity in Spain (3,000 photovoltaic and 900 wind) with an associated investment of EUR 3.3 billion. This transaction represents the first transaction for Arena Power, which is currently developing a project portfolio of 1,000 MW in Spain. Arena Power was created in 2019 with the ambition to become one of the leading players in the Spanish renewable generation and hydrogen production markets.