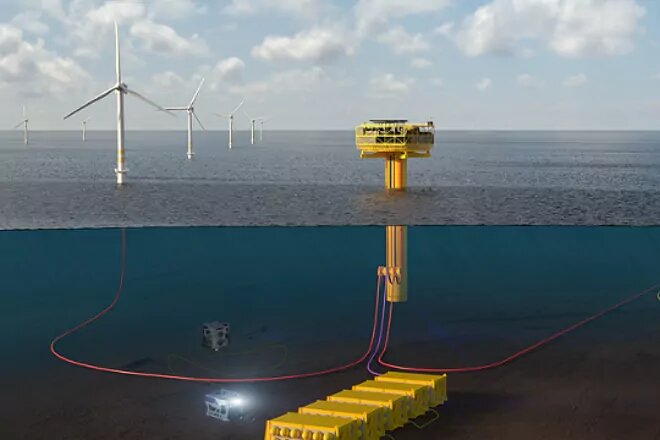 Repsol is participating, together with a consortium made up of other large companies in the energy sector, in a pioneering project in Norway that uses wind power to extract green hydrogen from seawater.

Called ‘Deep Purple’, the development of this system is led by TechnipFMC and involves, along with Repsol, Vattenfall, ABB, NEL, DNV GL, UMOE and Slattland.

This pilot project, with an initial budget of nine million euros and which has received financial support from the Norwegian state through the institution Innovation Norway, will enable the development of an advanced energy system for the production of green hydrogen powered by offshore wind and will open the door to the consortium partners to prepare the system for large-scale commercial use offshore, said TechnipFMC.

Thus, the aim of ‘Deep Purple’ is to integrate proven technologies to provide scaleable solutions for offshore green hydrogen production and renewable energy.

Specifically, the system consists of offshore wind turbines and offshore hydrogen technologies for the production, storage and transport of energy in the form of pressurised green hydrogen. It can also be used to produce, store and deliver hydrogen to consumers at sea or exported in a pipeline to the coast.

In this way, the aim of the ‘Deep Purple’ project is to convert energy from offshore wind into green hydrogen through electrolysis. The green hydrogen would be stored on the seabed and used for various applications, such as ensuring a stable supply of renewable electricity to oil and gas platforms or maritime transport.

The group led by Josu Jon Imaz, in its clear commitment to being a protagonist in the energy transition, has experience in both offshore wind and green hydrogen.

In the case of offshore wind power, it participates in the WindFloat Atlantic project, which has been fully operational since last summer and supplies clean energy to the Portuguese electricity network.

As far as hydrogen is concerned, energy, which is the first producer and the first consumer of hydrogen in Spain, is one of the group’s main pillars in its decarbonisation strategy.

In this sense, Repsol plans to make investments of between 2.2 and 2.9 billion euros in the period 2021-2026 linked to projects in the hydrogen chain.

The energy company, which last November launched its new strategic plan until 2025, in which it contemplates investments worth 18.3 billion euros, thus aims to be the leader in renewable hydrogen on the Iberian Peninsula to reach an equivalent production of 400 megawatts (MW) in 2025, with the ambition of exceeding 1.2 gigawatts (GW) in 2030.