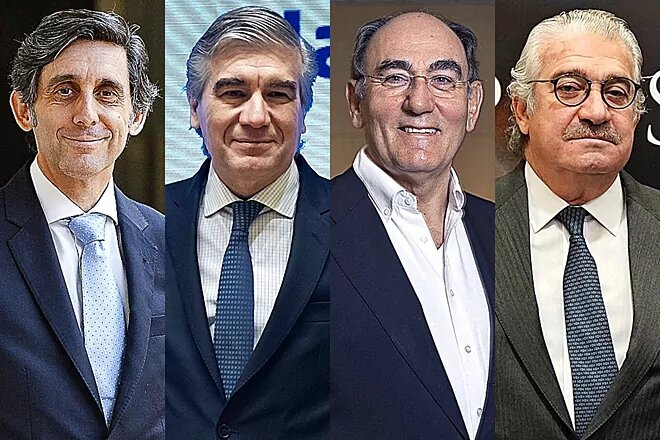 Telefónica, Naturgy and Iberdrola are making a radical change to their debt strategy.

Companies are refusing to shield fixed-rate liabilities, as the Covid crisis and the ECB’s artillery anticipate a long era of cheap money. Endesa and Aena also reduce their debt coverage.

The managing director of CaixaBank, Gonzalo Gortázar, made it clear in one of his last public speeches: the markets discount that the Euribor will be in negative territory at least until 2031. The Covid crisis has caused the expectation of a rise in interest rates, which in February looked close, to be delayed by more than a decade. The negative part is for the banks; companies enjoy the positive one. Telefónica, Naturgy, Iberdrola, Endesa and Aena are making the most of it.

The first wave was the reduction in financing costs, which have returned to record lows following the upturn during the worst of last spring’s confinement. Now the second part has arrived: the large Spanish companies have put an end to the strategy of shielding debt that they undertook to protect themselves from a rise in interest rates.

Money at a discount

For several years, companies have been increasing the percentage of fixed-rate debt in their total liabilities, with the aim of securing financing for as long as possible at low prices and sleeping easy at the prospect of rising prices. The European Central Bank (ECB) and Covid have made this effort unnecessary. The threat has gone away.

Telefónica, Naturgy, Iberdrola, Endesa and Aena were the first to change course and reduce the weight of fixed-rate debt on their total liabilities drastically in only nine months.

From the end of 2019, when the rise in rates seemed just around the corner, to the third quarter of 2020, when any expectation of normalisation in the short term has been volatile, the average fall in the percentage insured at fixed rates for these companies is nine percentage points.

Aena is in the lead. The manager of Spanish airports had 87% of its fixed-rate armoured debt in 2019, a percentage that has fallen to 71% at the end of the third quarter of this year, as the company’s accounts show.

The reduction is 16 percentage points, the largest among large companies in the Ibex 35 index.

Nor did Endesa come to a standstill, with a fall of nine percentage points leaving its coverage at 61%, the lowest among the largest corporations.

Telefónica suffered a similar fall, with eight percentage points less in nine months and 67% of fixed-rate debt as of September. Iberdrola has reduced its shield by seven basis points so far this year and Naturgy has raised it from 86% to 81%.

They are not the only ones. If we take the data from the first quarter to the third, Cellnex and Red Eléctrica also join the list, although with smaller cuts in their coverage.

The percentages of fixed-rate debt remain high in all cases, but companies have begun to open up to the price of floating rate money and have done so in a two-way street.

The first option is not to give up on the financing that comes with this route and to stop concentrating the majority of their operations in funds that are proof against high prices. The second is to eliminate artificial hedging.

Iberdrola is the best example of this. Naturally, the fixed-rate liabilities of the electricity company account for 63% of its debt, but to this must be added the contracting of derivatives for future interest rate fixing which raise the final amount to 70.6% of its debt.

In the third quarter, the company had contracted products of this type for 3,017 million euros and this is the item it is reducing most, because not long ago it was close to 5,000 million euros.

These derivatives which artificially guarantee a fixed rate have a cost, as does giving up variable financing which can be cheaper and this is where companies have begun to save now that the scenario for the price of money has changed abruptly.

The artillery launched by the European Central Bank (ECB) and its counterparts around the world to combat the crisis caused by the coronavirus pandemic has ended the expectation at the beginning of the year that rates could rise this year after the long period of contraction caused by the financial storms of 2008 and 2012.

And it is not a one-off delay. As CaixaBank announced, the normalisation is counted in decades, so companies are no longer obliged to take measures to set their financing costs at current prices, because the new forecast is that they will remain in ultra-low environments for a long period of time.

Some financial departments have already started to apply the new coordinates and the trend is expected to spread in the near future.