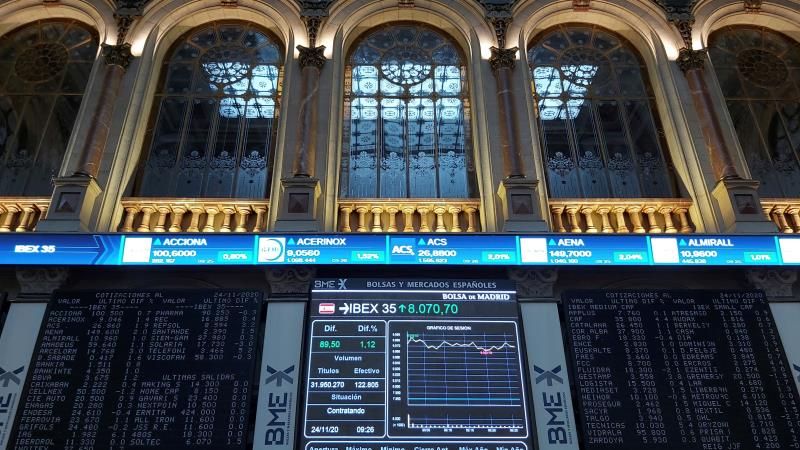 The Ibex assaults the 8,000 with the pull of Telefonica, IAG, Melia and Repsol.

The start of the transition in the White House shortens the time frame for new fiscal stimulus in the US, and markets reinforce the optimism coming from vaccines. The rises are widespread, also in an Ibex that is intensifying its assault on the 8,000 point barrier that it has consistently hit since last week. IAG, Meliá, Repsol and Telefónica are leading the increases.

With one week to go before the end of a historic month of market rallying, Donald Trump is in charge of paving the way for continued optimism. Following the first election results, the US president himself promised a legal battle that threatened to delay political uncertainty. This scenario was put on hold with Donald Trump’s decision to initiate and facilitate the handover of power in the White House.

Moreover, the markets are already putting a face to many of the new protagonists in this changeover of power. Among the most celebrated is the more than possible appointment of Janet Yellen as Secretary of the Treasury. The former president of the Federal Reserve will be responsible for coordinating the billion-dollar fiscal stimuli promised by the Biden administration. The facilities granted by Trump to take over augur well for a rapid transition, and therefore, an upcoming launch of the stimuli that the market has been waiting for months.

Wall Street celebrates the handover with hikes, and optimism spreads to Europe. The Spanish stock market is once again on track to break through the 8,000 point barrier, a level it has been hitting since last week. In three of the four previous sessions, the Ibex ended up less than 25 points from this level, unheard of at the close of March. The advances are gaining strength today, and the Ibex is even approaching 8,100 points at its intraday highs.

The tourism sector is taking special advantage of the growing hopes for a forthcoming start to the vaccination against the coronavirus, a key factor in the sector’s recovery. Investors also welcome the increased relaxation of quarantine imposed on travellers in the UK. IAG and Meliá are once again among the most bullish stocks in the Ibex, with gains that are close to 10% in the case of the hotel industry. Without abandoning the hotel sector, Amadeus and Aena are also trading positively.

The rises extend to cyclical sectors such as those linked to raw materials, in parallel with the highs since March which are close to the price of crude oil. Repsol extends the spectacular rise it made in November, which is now closer to 60%, and ArcelorMittal is just one step away from erasing all the losses it accumulated over the year as a whole.

The Ibex finally hit 8,000 points yesterday, due in part to the correction suffered by Telefónica. The telecommunications company reacted with falls of 3.79% to the reduction in rating issued by S&P, despite the disinvestments made by the teleco. In today’s session, Telefónica compensated for its falls with a rise of 6% at times, reaching 3.5 euros per share at its maximum intraday price.

Sectors such as the banking sector are among those that have benefited most from the hopes of economic recovery as a result of the vaccines and stimuli. BBVA, which is the protagonist in its merger negotiations with Sabadell, is being boosted by analysts at Morgan Stanley, who are raising its valuation to 4 euros per share.

The climate of optimism in the markets triggered a rotation that left the Ibex’s star stocks in 2020 lagging behind in November. Solaria, which was downgraded yesterday by RBC, PharmaMar, Cellnex and Siemens Gamesa, repeated falls in yesterday’s session, and today they are once again behind the Ibex.

The rest of the European stock markets joined the climate of optimism that the markets are once again displaying, encouraged by the new stimuli planned (those planned in the US will be joined by those planned for December by the European Central Bank, among others) and by the antidotes to the coronavirus resulting from the advances in the development of vaccines. The German Dax, having confirmed its biggest remodelling in history, is expanding its mattress to over 13,000 points.

The Frankfurt Stock Exchange takes over some of the highlights of the day in Europe. The agricultural machinery manufacturer Deutz sinks by about 10 percent after withdrawing its medium-term forecasts. The car rental company Sixt has suffered a somewhat more moderate punishment, given the cold reception given to its new forecasts for 2020. A more positive sign is the listing of Continental. The tyre manufacturer appreciates the improved recommendation issued by Citigroup.

Bullish references persist for oil companies. Oil prices continue to climb to their March highs amid hopes of stimulus and vaccines. Brent’s barrel is above $46, and the West Texas-type barrel, the benchmark in the US, is $43.

The foreign exchange market is more stable. The euro is frozen at 1.18 dollars, despite the slowdown noted yesterday by the Eurozone’s composite PMI. The pound, on the other hand, resists at 1.33 dollars.

Portfolio adjustments are even lower in the public debt market, pending the news that the European Central Bank will release in December. The interest rate demanded on the Spanish bond is again around 0.07%, just above its historical minimums, with the risk premium close to 65 basic points.