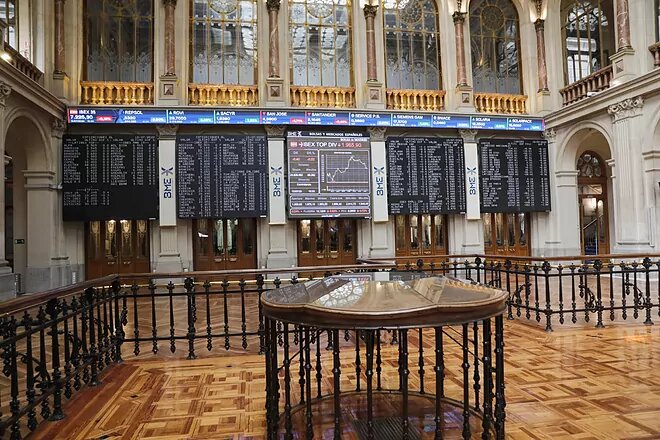 The Ibex continues to slow down despite the data from China.

The much higher than expected GDP figures published in China are not sufficient stimulus to revive European stock markets. In a day without Wall Street references because of the US holiday, the main indices are pointing down, and the Ibex is in danger of falling to 8,200 points.

The week begins in the financial markets with a notable absence, that of Wall Street. The Martin Luther King Day holiday in the United States leaves investors without their main reference. and could reduce activity during the day.

The closure of Wall Street gives even greater prominence to China in a session in which its GDP for the fourth quarter of 2020 was known. The figures have not only exceeded expectations. The 6.5% growth means that even the data prior to the outbreak of the crisis unleashed by the coronavirus has improved. Analysts had estimated growth of 6.1%. The containment of the pandemic has succeeded in accelerating the growth of the Asian giant, which ended 2020 with a 2.3 per cent rise in GDP. By 2021 the forecasts envisage growth of over eight percent, although the recent outbreaks of coronaviruses in China, including new containment measures, are now threatening to slow the pace of recovery.

The increasingly severe restrictions adopted in Europe in an attempt to contain the spread of the coronavirus also pose a threat to growth. Containment measures in place in other European countries are delaying the hoped-for recovery, pending more significant progress in the vaccination campaign.

European markets are not impressed by China’s recovery, and the slowdown continues in the Spanish stock market. The Ibex is unable to recover after losing 1.69% last Friday. The Spanish selective index is pointing downwards, with intraday lows below the level of 8,200 points. After starting 2021 with gains of 4% in the first week, the Ibex reduces its gain for the year to just 1%.

On the eve of the start of the new season of results presentation, one of the earliest sectors in the publication of its accounts, the banking sector, suffers to slow down the corrective recorded on Friday. The retreat in the escalation of debt interest accelerated the collection of profits in a sector that began 2021 leading the rises in the Ibex. Sabadell and CaixaBank are trying to contain the decline of nearly 5% recorded last Friday, and BBVA is consolidating its margin above four euros per share.

Investors from sectors such as the banking sector are closely monitoring the evolution of the debt market. The interest demanded on the Spanish ten-year bond continues to fall, and is now at around +0.05%, compared to +0.12% last week.

The investment picture is not yet clearer for the companies most closely linked to tourism, and in particular for the companies most dependent on air traffic, which are once again threatened by the increasing restrictions adopted in Europe. HSBC analysts are reducing their IAG rating and Aena’s recommendation to ‘reduce’. The two stocks, along with Meliá, stand out in today’s falls in the Ibex.

One of the strongest notes of the day in the Ibex is from Cellnex. The star value of the selective index over the last few years has started 2021 with a bump. JPMorgan’s analysts are supporting it by predicting a new rally in its shares, which are now closer to the 47 euro level.

The other European stock exchanges, without the reference today of Wall Street, also activate the brake. Portfolio adjustments, for the moment, are very limited, and the better than expected data from China fails to inject optimism into European markets, more concerned now about the threat to recovery posed by the increasing restrictions adopted against the coronavirus. Italy’s Eb awaits the outcome of key parliamentary votes on a possible government crisis, and Germany’s Dax distances itself from its recent records, and from 14,000 points.

One of the incentives for the increases planned for 2021, mergers and acquisitions, is completely lost in the case of Carrefour. The French supermarket giant suffers a further stock market correction of up to 7% after Canada’s Couche-Tard announced the withdrawal of its plans to launch a takeover bid on the Cac company, following a refusal by the French government.

The beginning of the week keeps the brake on the oil market. The correction suffered last Friday in the face of the impact of the increasing restrictions adopted in Europe and China gives way to slight additional cuts, leaving the price of the Brent barrel at $54. The West Texas barrel, which is the benchmark in the US, is now down to $52.

The holiday in the US and the lack of relevant macro data in Europe are reducing activity in the currency market for the time being. The dollar consolidates the gains made last Friday, amid a resurgence of doubts among investors more inclined to seek refuge in the dollar. The euro is stuck just below $1.21, while the pound repeats at $1.35.