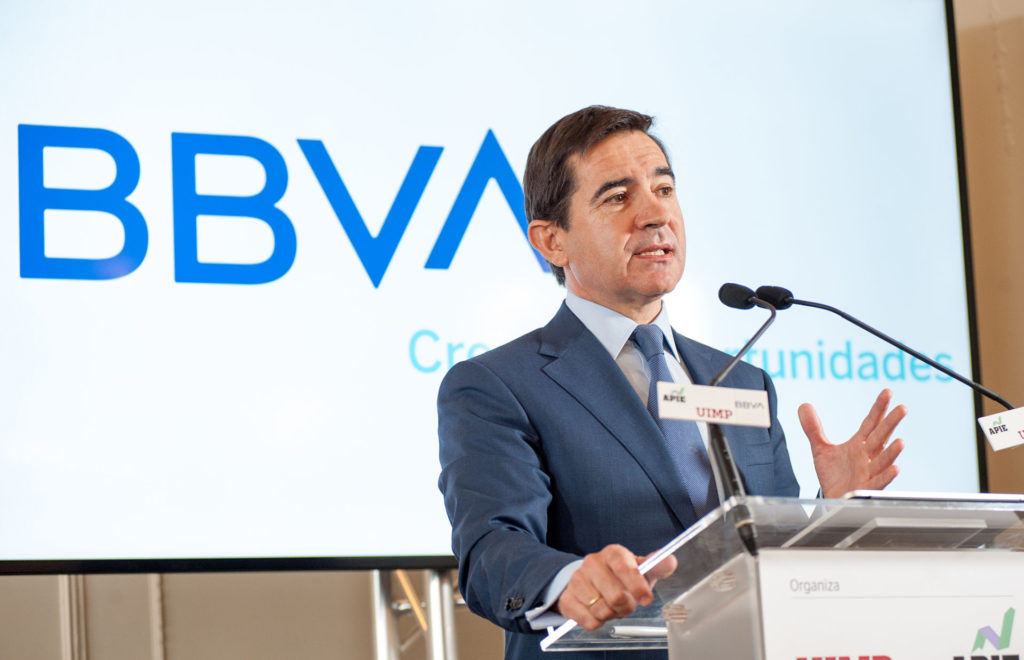 Torres prepares a Plan Renove from BBVA’s board to reduce FG’s footprint.

The second Spanish bank is considering changes to the board for the next meeting. Maldonado is one of those that can leave and the coordinating advisor will no longer be independent.

Carlos Torres takes new steps to gain control of the BBVA board of directors and to continue erasing the trail of his predecessor, Francisco González (FG). The second largest Spanish bank will announce changes to its top governing body in the coming weeks, according to financial sources consulted by this media. All eyes are on José Maldonado, who could leave the bank after a 24-year career that began as Secretary General of Argentaria.

With regard to possible changes to the board, BBVA states that «this is a process that is underway following the corporate governance procedures and no decision has been taken. As always, any proposal will be submitted for approval by the general meeting of shareholders and the market will be informed in due course».

Maldonado was one of FG’s strong men both in Argentaria and in the early days of the merger with BBV, until he took early retirement in 2009, when the controversial Sacyr assault took place and is now being investigated in the Villarejo case. Since then, he has remained an external advisor. He is also the longest serving member of the BBVA governing body -21 years-, followed closely only by Susana Rodríguez Vidarte -19 years-, who renewed last year.

Since he was appointed Chairman, Torres has been erasing the mark of his predecessor with little noise and no hurry, but without pause. Only last year, the board of the heavyweights left as Tomás Alfaro, José Manuel González-Páramo and Carlos Loring Martínez de Irujo. Although it was FG who took Torres to BBVA and chose him as his successor, the outbreak of the Villarejo case and the bank’s judicial strategy have driven these two bankers away. This relationship has experienced two particularly tense episodes: when Torres asked FG to leave the presidency of honour, and when one of those investigated in the case – Antonio Béjar – said that the former president had had access to information from the bank’s internal investigation.

Together with the possible departure of Maldonado, the BBVA board is facing another six director renewals, some of them key, such as that of the vice-president, José Miguel Andrés Torrecillas, whose work as coordinating director was questioned during 2019, to the point that former executives asked for his resignation.

The bank must also decide whether the coordinating advisor who took over from Andres, Juan Pi Llorens, will continue. In his case, the renewals are for three years and he will no longer be independent during 2023 – when he will have completed 12 years in the organ – at which time he would have to leave the position of coordinator and become an external advisor. The sources consulted indicate that BBVA will resolve this mess before the date approaches.

The other four who have to renew are Jaime Caruana, former governor of the Bank of Spain, who sounded for non-executive chairman of BBVA before Torres was appointed; Belén Garijo, who has recently been appointed CEO of Merck; Ana Peralta, former director of Pastor and Bankinter, who joined in 2018, and Jan Verplancke, who also came to the board three years ago because of his technological experience at Standard Chartered.

This Plan Renove comes at a time of transition at BBVA, with the Villarejo case on standby after the departure of the public prosecutor Ignacio Stampa, and after the door was slammed on a merger with Banco Sabadell.

This last episode brings to the table the differences that exist in the board of the Basque bank. On the one hand, part of the board supported the idea of buying Sabadell as a way of using the capital obtained from the sale of the business in the United States -9.7 billion-. On the other hand, the CEO, Onur Genç, showed in public his doubts about the operation, with a vision that finally prevailed.