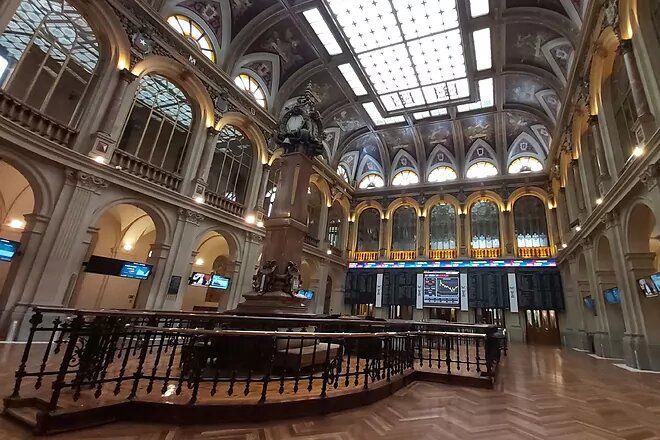 The Ibex keeps the brakes on.

The markets begin the week without major references, awaiting the key events of the coming days. The Ibex, with hardly any bullish support, is once again stuck below 9,100 points.

The markets breathed a sigh of relief last Friday when the US employment figures were released. With hardly any corporate results, the spotlight is shifting to another key figure to gauge the options for a change of cycle in the Federal Reserve’s monetary policy. The inflation figure for May will be released next Thursday, with analysts expectant after the sharp rebound in April. The CPI release will coincide with the European Central Bank meeting, although the timetable for a withdrawal of monetary stimulus in Europe is expected to be later than on the other side of the Atlantic.

The start of the week has already brought some relevant macro data, such as the ten-year high in China’s imports, largely due to the rally in commodity prices. In Germany, industrial orders surprised with an unexpected 0.2% drop in April, compared to the expected 1% increase.

When calibrating their portfolio adjustments, investors are not overlooking two significant stimulus and tax developments. On the one hand, the agreement within the G7 framework to establish a global corporate tax, with a minimum of 15%, and on the other hand, the multi-billion dollar investment plans of Joe Biden’s government in infrastructure.

Caution persists in equities. Wall Street does not register significant changes in futures, and the Asian session has reduced the variations in Japan and China to a minimum. The day brings a new dose of tension on chip supplies, due to the consequences of the coronavirus outbreak detected in Taiwan, one of the chip industry’s meccas.

European equities cooled again, and the Spanish stock market kept the brakes on. Last week it broke a streak of seven consecutive weeks of rises, with electricity, tourism and renewables taking over the declines. The Ibex today remains below the 9,100-point level, awaiting further references.

The Ibex hardly found any relevant support to reinstate the gains. In the chapter of cuts, the inclusion of several banks stands out, on a day in which Jefferies analysts predict very different, even opposite, stock market trends in the sector.

Renewable energy companies such as Solaria and Siemens Gamesa are struggling to cut the falls of the end of last week, and tourism companies such as IAG are keeping the brakes on the stock market while awaiting the resurgence of British tourism. The airline also suffers from the uncertainty generated in the United Kingdom by the spread of the Indian variant of Covid.

The rest of the European stock markets are also on the brake, with indices such as the pan-European Stoxx 600 and the German Dax just a step away from their all-time highs. The unexpected decline in German industrial orders data does not help to regain optimism, although at the same time it cools the prospects of a change of cycle by the ECB, which will meet this Thursday.

New worrying news from Taiwan about the shortage of chips raises uncertainty about supply to one of the star sectors for 2020 in European equities, the automobile sector. On the London Stock Exchange, oil and mining companies corrected part of their recent gains as the commodity market rally slowed down. The day on the Paris Stock Exchange activates the brake on Carrefour, which has decided to abandon the purchasing alliance signed with Tesco. The shares take on a more positive sign in the also French Edenred, boosted by the ‘buy’ recommendation issued by Deutsche Bank analysts.

The week’s agenda focuses on Thursday with two of the most eagerly awaited events: the US CPI data and the ECB meeting. For the time being, inflationary pressures remain contained, with interest rates trading below 1.60% in the US, after the relief provided by last Friday’s employment data. In Europe, negative interest rates hover around -0.20% on the German bund, and Spanish bond interest cools to around +0.45%.

The lull extends to the currency market, largely awaiting Thursday’s references. The euro repeats at 1.21 dollars, and the pound at 141 dollars. In the cryptocurrency market, bitcoin is once again holding back, locked at the $36,000 level. A more traditional asset such as gold is trying to stay close to the 1,900 dollars per ounce reached last week with its rises.

One of the hotbeds of inflationary tensions, the commodities market, is consolidating its recent gains. The price of oil awaits news of a possible lifting of sanctions against Iran with a halt. The Brent barrel fell back to 71 dollars from a two-year high, and the West Texas barrel, the US benchmark, cooled to 69 dollars.