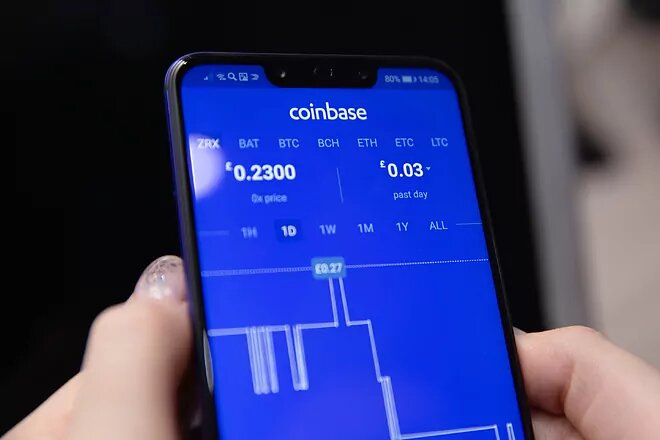 Cryptocurrencies are storming the traditional markets, and they are doing it in a big way. Coinbase, the largest cryptoasset market in the US, debuts this Wednesday on the stock market and analysts predict a valuation of close to $100 billion, more than the Nasdaq and the NYSE combined. BBVA, a Coinbase shareholder, will benefit from its success.

When Brian Armstrong and Fred Ehrsam founded Coinbase in 2012 with the aim of making bitcoin accessible to everyone, their plans did not include listing on a traditional market such as the Nasdaq and surpassing, in terms of valuation, the Nasdaq itself and the more historic NYSE (New York Stock Exchange). At the close of trading yesterday, the Nasdaq management company was worth $26 billion, and $66.69 billion in the case of InterContinental Exchange, owner of NYSE Euronext.

Less than a decade after its founding, the markets are now contemplating with astonishment the figures that the cryptocurrency trading platform could reach in its expected debut on the stock exchange, a milestone in the launch of cryptoassets as an investment alternative.

The Nasdaq is the stock exchange chosen to host this other market. For its debut, Coinbase has avoided the traditional IPO route and will do so by means of a listing, with the direct placement of its shares.

The choice of the listing procedure, without a previously fixed reference price for its debut on the stock exchange, complicates the objective of valuing Coinbase. The latest financing operations in private markets raised its valuation to 77 billion dollars, about 65 billion euros.

The historical records reached by bitcoin, today above 64,000 dollars, give an additional boost to Coinbase in its IPO. For other analysts, however, it is precisely the new dimension that cryptocurrencies are entering in the traditional investment world thanks to Coinbase’s million-dollar debut on the stock exchange that has pushed the bitcoin price to new all-time highs.

The recent investment boom in cryptocurrencies has given an extra injection of optimism to analysts’ valuations. Experts consulted by Bloomberg put this figure at around 100 billion dollars, some 85 billion euros, a value similar to that of Inditex, Spain’s largest company by market capitalisation.

The first quarter earnings preview published last week by Coinbase points to figures close to this level if the multiples suggested by analysts are applied. D.A. Davidson, the first broker to initiate coverage of Coinbase on 2 March, has doubled its target price as a result of these results, to a valuation equivalent to 88 billion dollars, about 74 billion euros, the result of multiplying by 20 the revenue of 4.4 billion dollars expected for 2021.

Volatility linked to bitcoin
Stability is not exactly one of the hallmarks of Coinbase’s results. Analysts point out that its business is closely linked to the cryptocurrency cycle, one of the assets most characterised by its volatility despite the greater containment of recent months.

The trading platform’s business soars in periods, such as the first quarter of the year, of investor fever for bitcoin and other digital currencies. The company, in the midst of bitcoin’s succession of records, has increased its number of users to 56 million, and according to its data, it records transactions worth 223 billion dollars, some 188 billion euros, with a market share of 11.3% of the volume traded on cryptocurrency markets worldwide. Trading, on the other hand, declines sharply in periods of less spectacular returns or declines in bitcoin and other digital currencies.

On the other hand, the attraction of Coinbase lies in the fact that its leadership in the US and its exponential growth make the new listed company a major player in the cryptocurrency market, a business with many uncertainties as yet but with great potential for growth if the attractiveness of bitcoin as an investment alternative is strengthened and it establishes itself as a growing method of payment.

Capital gains in the millions for BBVA
Regardless of whether the platform reaches a valuation of 100 billion dollars, its shareholders will make millions in latent capital gains. At the head of the shareholder structure are Brian Armstrong, CEO of Coinbase, one of its founders and described by some analysts as ‘the Elon Musk of the crypto world’, and Fred Ehrsam, co-founder of the group.

Funds and venture capital firms complete Coinbase’s shareholding until its debut as a listed company on the Nasdaq, and it is in this section where the presence of BBVA stands out. The Spanish bank is present in the capital of the cryptocurrency trading platform through Propel Venture Partners, a company that operates as an independent venture capital fund.

According to bank sources, BBVA’s stake through Propel is less than 1%, a very small percentage, but given the size that Coinbase could reach on the stock market, it would allow for latent capital gains in the millions for the Spanish bank. If a valuation of 100 billion dollars were confirmed, 1% would be equivalent to 1 billion dollars, or 850 million euros.

Almost the entire valuation of BBVA’s stake would be latent capital gains. The bank joined Coinbase in January 2015, according to the financial institution, while adding that «the price has never been made public». Six years ago, BBVA’s venture capital company participated with other entities in a series C financing round for a total amount of $75 million, when the platform barely had 2.1 million users, compared to the current 56 million. One of the references used for its valuation, the price of bitcoin, was quoted in January 2015 at around $220. The current price of the cryptocurrency has multiplied this price 286 times.