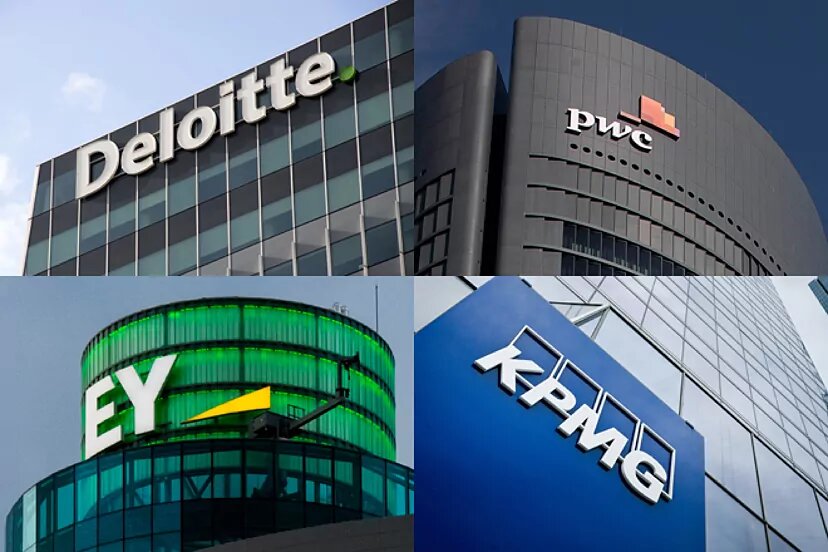 Deloitte, PwC, EY and KPMG bill 4% more after slowing their growth due to Covid.

The ‘Big Four’ have a turnover of 2,553 million euros and, despite their resilience in the face of the pandemic, they are moderating the upward trend of recent years and are returning to the growth rates recorded in 2012.

The four large professional services firms – Deloitte, PwC, EY and KPMG – slowed their growth rate last fiscal year due to Covid, which had a different impact on these companies given their different year-end closings. The so-called Big Four closed the 2020 financial year with a total turnover in Spain of 2,553 million, an increase of 3.9% on the previous year’s 2,457 million, and a workforce of 22,159 professionals.

Although these companies managed to overcome the tsunami caused by the pandemic given the diversity of their services, the growth recorded means a return to 2012 levels.

In line with previous years, the Big Four continue to diversify in terms of services. In this regard, consulting continues to gain weight and now represents 36% of their turnover, very close to audit and risk services which, with 38% of the total, continue to be the cornerstone of their business, except for Deloitte, which has made consulting its flagship.

Firms have also boosted cyclical services, such as restructuring, refinancing and insolvency and labour law, to help companies recover from the crisis caused by the coronavirus and have launched themselves into the race to advise on European and European funds.

By company, Deloitte continues to top the podium and is widening the gap with its competitors. The firm closed its last fiscal year – from June 2019 to 31 May 2020 – with a turnover of more than 865 million, which represents a growth of 3.95%.

The company, which maintained its commitment to talent last year with a reinforcement of its workforce, improved its revenues by 10% in consulting, which, with 435 million euros, now represents more than half of its turnover in Spain. Audit and risk, with revenues of EUR 239 million, grew 1.9%, and transaction advisory revenues were EUR 87 million (+3.5%). By contrast, revenues from legal and tax advice fell by 11.7% to 105 million.

EY – which shares a fiscal calendar with PwC – grew the most last year, with revenues of 574.4 million euros, an increase of 8.3%. A higher increase than its rivals but behind the 16% growth of a year earlier. EY, which includes in its turnover everything invoiced by Spanish companies both in Spain and abroad, boosted its consulting revenues to 150 million (+21%). The rest of the business came from auditing, 210 million; legal and tax (144 million) and transaction advice (70 million).

The Big Four most penalised by Covid was KPMG, which closes its financial year in September. Six months of its fiscal year were marked by the pandemic, resulting in a slight 0.3% drop in revenues. According to company sources, if it had closed the financial year in June, turnover would have grown by 5.09% and if it had done so in March, before the confinement, the increase would have been 6.81%. With 471.7 million in turnover, the area of KPMG most affected by Covid was consulting, which decreased by 9.6% to 118.6 million, due to the fact that the uncertainty of the market has lengthened the maturity periods of the projects. In contrast, audit grew by 4.2% to 253 million and legal improved by 0.9% to 100.5 million.

RANKING BY REVENUE OF PROFESSIONAL SERVICES FIRMS IN SPAIN
The EXPANSIÓN ranking includes the largest professional services firms present in Spain that provide services in the areas of auditing, consulting, legal and transaction advisory. The list is headed by Deloitte, PwC, EY and KPMG and includes another forty companies in the sector. Together, the companies had a total turnover of 3,334 million euros in the last fiscal year 2020, a 4.1% increase, and generated more than 32,000 jobs in the country, according to the data provided by the groups.