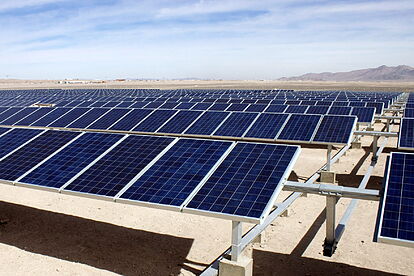 EQT, the private equity firm that controls Idealista, has launched a friendly takeover bid for 100% of Solarpack at a price of 26.5 euros in cash per share, which represents a 45% premium over the price at which it closed yesterday and a valuation of 881.205 million.

Renewable energy fever resurfaces today with the takeover bid that EQT, the company that controls Idealista, has just launched for Solarpack.

Solarpack shares have adjusted to the price of the takeover bid within minutes of the market opening. They have risen 8 euros in one fell swoop, trading at 26.3 euros, almost 44% higher than the 18.28 euros at which the company closed yesterday on the stock exchange.

The Swedish private equity fund is offering 26.5 euros in cash for each Solarpack share, which represents a premium of 45% over yesterday’s closing price and 16.6% over the weighted average price of the last six months. The total amount of the takeover bid is 881.204 million euros. EQT considers that this price meets the requirements to be considered a «fair price», which it will justify by means of a valuation report prepared by an independent expert.

EQT secures control
EQT has already secured control of Solarpack by agreeing to purchase the 50.957% capital that was in the hands of Beraunberri, Burgest 2007 and Landa, companies of the founding family of the company, the Galíndez, who yesterday agreed to accept this offer with the commitment that Pablo Burgos Galíndez will continue as CEO after the takeover bid.

Other relevant shareholders of this renewables company, which debuted on the stock exchange in 2018, are Santander (5.5%), Carmen Ybarra Careaga (5.1%) and Invesco (2.1%).

Within the terms of this offer, the companies Beraunberri and Burgest 2007, the investment vehicles through which the vice-president José María Galíndez Zubiria and Burgos Galíndez have their 40% and 7.9% respectively, have committed to invest 45.9 million euros and 26.6 million, respectively in Veleta BidCo, if the takeover bid comes to fruition. Thus, Galíndez Zubiria would control 5.2% of the capital and Burgos Galindez 3%.

The bidding company that ‘hides’ behind EQT is Veleta BidCo, which is wholly owned by Veleta TopCo, and which in turn is controlled by the fund EQT Infrastructure V Investments, wholly owned by the Swedish EQT.

CNMC, Executive and CNMV approval
The effectiveness of the offer is subject to the acceptance of at least 75% plus one share of Solarpack’s share capital.

But it also depends on the authorization of the National Markets and Competition Commission (CNMC) and the approval of the Council of Ministers «given that both the offeror and the entities that exercise direct and indirect control are entities resident in the European Union, and the target company operates in a strategic sector in Spain,» according to the takeover bid prospectus.

To this end, it indicates that it will initiate the procedure for requesting authorization from the Directorate General for International Trade and Investments of the Ministry of Industry, Trade and Tourism «as soon as possible after the announcement of the takeover bid and in collaboration with said authority».

Finally, the CNMV will not approve the offer until it has been accredited that the authorization has been obtained. However, EQT considers that the requirement of this prior authorization by the Council of Ministers will cease to be in force on July 1, unless the validity of the regulation is legally extended before that date, as EXPANSIÓN has already informed.

Advisors
Citi has advised the selling shareholders and Cuatrecasas has advised Solarpack. On the other hand, Credit Suisse has been the financial advisor to EQT in this transaction and Clifford Chance the legal advisor.

EQT, which manages assets of more than 67 billion euros in 26 funds, was founded in 1994 by Investor AB, the largest industrial holding company in the Nordic region, and part of the Wallenberg family, which also has a long history of investing in Europe.

Since its inception in 2005, Solarpack has developed/built 1.3 GW in eight countries, mainly in Spain, Chile and India, of which 450 MW are owned and operated by the company. Headquartered in Getxo, Solarpack employs more than 260 people.