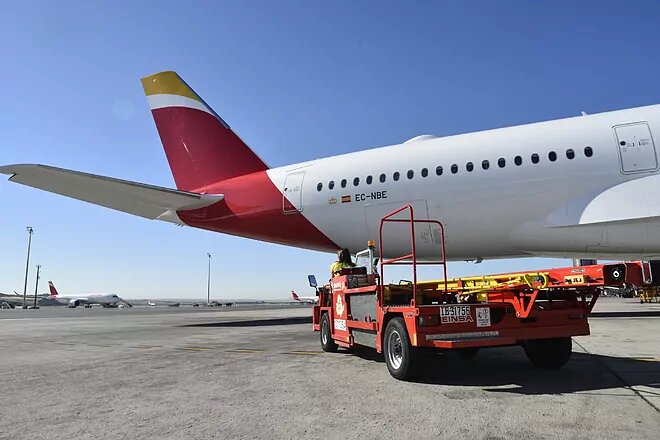 IAG only managed to increase its revenue in the cargo area.

Iberia, the only company of the Spanish-British group that reduced its cargo turnover in 2020, is accelerating with the scheduling of flights exclusively for this segment.

The slump in airline revenues has only one counterbalance: freight, where the paradox is that turnover is soaring despite the fact that cargo handled has been reduced in the midst of the pandemic. The parameter is common to the three big European groups: IAG, Lufthansa and Air France-KLM.

The group of British Airways (BA), Iberia and Aer Lingus closed 2020 with revenues of 1.306 billion for this line of business, up 17% on 2019, despite freight carried falling by almost 40% to 3.399 million tonne-kilometres. This unit takes into account the distance over which the same product is carried, as it is not the same to move a kilo from Barcelona to Palma as from Madrid to Buenos Aires. Cargo, which in 2019 accounted for 4.4% of IAG’s revenue, had a weight of 16.7% in 2020.

But within the Spanish-British group, the evolution has been different. BA and Aer Lingus were able to increase their cargo revenues, but Iberia reduced them by 17.5%.

Before the pandemic, IAG did not have any cargo-specific aircraft, but by the end of 2020 it had converted five of them. Iberia now has three adapted Airbus A330 aircraft. The new configuration makes it possible to move 105 cubic metres or 18,000 kilos of cargo in the cabin, in addition to that in the hold.

The company headed by Javier Sanchez-Prieto does not intend to modify new aircraft and those it has converted can be returned to their original function.

Closure of Latin America
The companies of the group led by Luis Gallego have centralised their cargo activity in IAG Cargo. The explanation for why Iberia has performed worse than BA and Aer Lingus in this segment -Vueling, although it transports cargo, does not publicly account for it separately- is to be found in the impossibility of operating in Latin America, its natural market.

After the borders were closed, Iberia barely offered flights to Mexico, Brazil, Chile, Colombia, Ecuador and Argentina, which are its main cargo markets, except for occasional repatriation flights.

Iberia sources explain that the situation changed in the last months of 2020 when almost all connections to Latin American capitals were re-established, with 45% of pre-COVID capacity. The airline has had to make its operations more flexible and on the routes to Bogotá and Lima, 100 flights were offered, departing from Madrid exclusively with cargo and returning with EU travellers. Pharmaceuticals, electronics, textiles and automotive components make up the bulk of the cargo transported by Iberia.

In the first quarter of this year, cargo revenues have already equalled those prior to the coronavirus, and even in March they are higher. For example, this month Iberia has scheduled almost 150 flights for cargo alone to cities such as São Paulo, Los Angeles, Tel Aviv and Bogota.

Diverting from the sea to the sky
Industry sources explain that the near collapse of maritime traffic, given the lack of containers, diverted a small part of the demand to the air sector, which can also move them more quickly.

With the exception of couriers – DHL or FedEx, for example – the bulk of goods are moved by passenger flights, as airlines have almost no dedicated cargo aircraft. As a result, higher demand and reduced supply drove up average prices (yield).