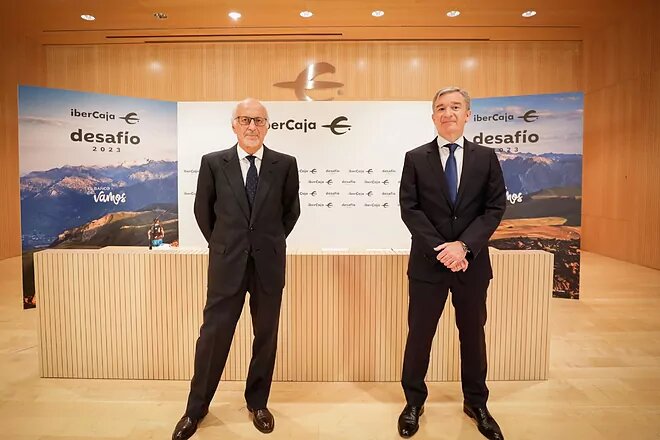 Ibercaja hopes to go public at the end of 2021 or next year.

It rules out mergers, but is open to endowing a reserve fund in 2025 as an alternative to going public. It aims to achieve a ROTE of more than 7%, double by 2020.

Ibercaja maintains its plans to go public and hopes to be able to do so by the end of 2021 or throughout 2022, when the two-year extension granted by the government due to the pandemic expires.

José Luis Aguirre, chairman of Ibercaja, said on Wednesday that the market outlook «is still not good», but he was convinced that there will be windows of opportunity to launch the operation at the end of this year or in 2022. And he committed to a pay out (percentage of profit for dividends) of 50% if the European Central Bank (ECB) decides to lift the restrictions on shareholder remuneration policy that weighs on the sector by Covid.

The Ibercaja Foundation owns 88% of the bank and has to reduce this position to less than half, according to the Savings Banks Act. The management team considers that it has all the preparations ready to decide at any time whether to go public.

Prepared
In fact, it hired Rothschild as an independent advisor at the end of 2018. In addition, Morgan Stanley and JPMorgan are acting as global coordinators of the offer and are tasked with probing the market to find the best time to list.

But the management team does not rule out other options if it finally decides not to go public due to the low market valuation, such as setting up a reserve fund until 2025, which would allow the Foundation to keep its current stake or look for a partner to reduce it.

«The vocation today is to go public because it is the logical thing to do, but of course we are considering other options,» explained the president of Ibercaja. As EXPANSIÓN published, Ibercaja’s advisors suggest that the bank explore other alternatives. Among the possibilities to be studied, the bank’s top management has flatly ruled out merging with another entity.

Both Aguirre and Víctor Iglesias, CEO, flatly rejected yesterday the option of studying mergers and vindicated Ibercaja’s capacity to survive the wave of concentration due to the pandemic.

In fact, Ibercaja has designed a solo roadmap until 2023 and yesterday launched a new strategic plan, called Desafío 2023, in which it aspires to achieve a return on equity (ROTE) of more than 7%. This means more than doubling the ordinary ROTE levels of 3% with which it closed 2020. With this return, the bank would be able to cover the cost of capital due to its risk profile and its focus on mortgage business, according to the management team.

«We will capture customers in the current environment of mergers», guaranteed Iglesias, who advocated monitoring banking competition rather than encouraging mergers.

According to the bank, these commercial plans will allow it to increase its share of corporate lending by 50 basis points, to 1.5%, and to grow by an annual cumulative 8% in asset management (investment funds, pension plans and unit links). It also aims to increase its life and non-life insurance portfolio by more than 6%.

Digital sales
Another of the strategic levers will be digital transformation: it aims for digital sales to account for 50% of total sales by 2023. At the end of 2020, this percentage was 28%. Ibercaja has invested 50 million in infrastructures and technological projects between 2018 and 2020.

The bank’s management aims to keep its maximum quality capital ratio above 12.5%, as it is at present. It also aims to reduce the ratio of non-performing assets (non-performing and foreclosed assets) to below the current 5%.

The bank, which yesterday presented its new strategic plan to its more than 5,000 employees, ruled out further job cuts. Until mid-2022 it will execute the ERE agreed at the end of 2020, which envisages the departure of 750 employees, 15% of the workforce, and the closure of 200 branches, 20% of the network.