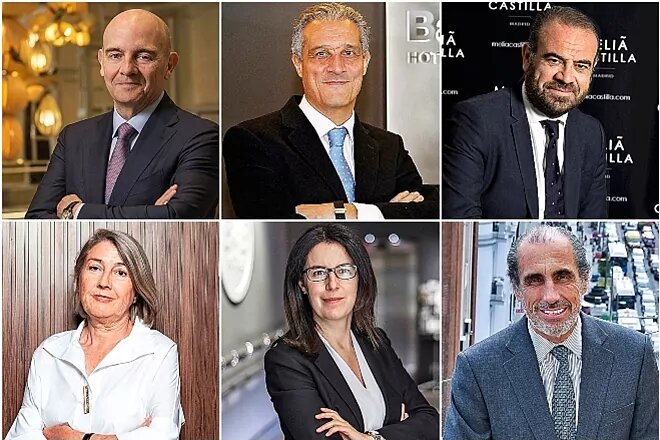 Meliá, Barceló, NH and RIU are banking on the summer to speed up vaccinations.

The major chains, with around 65% of their staff on lay-offs, warn of a shortage of bookings for Easter, but are confident that demand will intensify in the summer.

After closing the worst year in their history due to Covid, hotel companies are facing 2021 with an unflattering outlook for Easter due to the scarce bookings and the lack of visibility for the coming months. But the big chains are not giving up hope and are confident of reactivating demand if the vaccination process is accelerated, which would allow them to close a summer season that is at least better than that of 2020.

Tourism spending plummeted 78% in 2020, to 19,739 million, after the number of international visitors fell to 19 million, compared to 83.5 million in 2019. Only 7,684 hotels managed to end 2020 with their doors open in Spain, which is almost 5,000 fewer hotels than a year earlier, a trickle of closures that has intensified in the face of new waves.

Despite this initial situation, Spain continues to lead the ranking of preferred travel destinations. According to the digital marketing company Sojern, Spain is the European country with the highest number of flight bookings for the months of June, July and August, with 46.4% of the total, ahead of Greece (14.3%) and Portugal (12.8%).

In this context, the clamour of companies such as Meliá, Barceló, NH, RIU and Vincci is to speed up the vaccination process and put direct aid on the table. «It would be inexplicable that competing destinations such as Turkey or Greece overtake us in the preferences of European tourists, because they have done their homework better in the administration of vaccines, when Spain is recognised as the most competitive country, in terms of tourism, in the world,» explains Meliá.

NH warns that the sector cannot simply replicate the 2019 model. For the chain, «the rigour and enormous sacrifice» made by hotel companies in 2020 does not guarantee their long-term viability and urges the implementation of a national plan to promote tourism. According to NH, this is the time to modernise the current model, which focuses exclusively on volume, and to attract tourists with higher spending. To this end, the hotel companies have presented a series of initiatives to allocate a significant part of the European Next Generation funds to the recovery and transformation of the sector.

Barceló added that to reactivate demand, it would be advisable to create a programme of tourist vouchers and a digital health passport to guarantee safe mobility and tourism. «It is necessary to stimulate demand with concrete measures for when a significant part of the population is vaccinated and immunised and willing to travel again». Vincci, for its part, calls for aid aimed at stimulating consumption, such as lower VAT, tax deferrals or aid for loan repayments.

So far, in order to weather the storm, the large chains have opted to extend the ERTEs until the summer and, for the moment, only NH has informed workers in central services of its intention to apply collective redundancies. According to January data from the Ministry of Social Security, 112,980 people in the accommodation establishments sector are on ERTE. Specifically, Barceló, Meliá, NH and RIU have almost 11,400 of their 17,800 workers on ERTE suspension.

NH: «The recovery could start in the summer».

NH, which accumulates losses of 295 million until September 2020 -the latest data provided-, has more than 360 hotels in the world, 99 of them in Spain. Although it had nearly 300 hotels open in September, in the last quarter of 2020 it closed a hundred, with an occupancy rate of 20%.

NH warns of the need to implement a plan to promote tourism. The chain explains that recovery could begin in the summer – as the effects of the vaccine are consolidated – thanks to local and domestic travel. «Foreign travel, ridesharing and business travel would be the next stages of this recovery. This phase could be accelerated, because there is a significant latent demand,» they add.

Barceló: «It is necessary to stimulate demand».

Covid has disrupted Barceló’s plans, which by 2020 expected to have more than 400 million in ebitda and earn more than 200 million. «With the arrival of the pandemic, the forecasts became a dead letter and we closed the year in losses, with the worst results in our history,» they admit.

With 262 hotels in the world, 205 are still open. In Spain, half of its 64 hotels are operational and the Emperatriz hotel in Madrid will open on 26 February. Although they are confident that it will be a better summer than 2020, they warn that the evolution will depend on the vaccination process in Spain and in the main issuing markets and, they add, it is «necessary to stimulate demand». Now the little that exists «is concentrated in the very short term or from the end of summer and early autumn».

Meliá: «At Easter the domestic market will travel again».

The Covid has pushed Meliá into record losses, with a loss of 469 million euros up to September 2020 (latest published figures).

With 330 hotels in operation, Meliá currently has 134 hotels open. In Spain it has 140 establishments, 33 of which are open. The company explains that the average occupancy has fallen in 2020 by 45 or 50% compared to 2019, considering the hotels open, which were only a part of the total.

The chain estimates that if we are able to «keep the contagions at bay», at Easter the domestic market will gradually return to travel, much lower than in 2019, but improving compared to 2020. As for the summer, they recall that the recovery will depend on an improvement in the control of the pandemic and the evolution of the vaccination process, which would activate domestic demand, and possibly on the implementation of «safe tourist corridors» that allow channelling part of the demand from countries such as the United Kingdom.

«If the vaccination works, we expect not only a better July and August than in 2020, but we would have a longer holiday season than in 2020, as international flights would be reactivated and we could maintain seasonal hotels until October,» they add.

Meliá recalls that, in addition to accelerating the vaccination process, the sector is «crying out» for direct aid.

RIU has half of its 100 hotels open. In Spain, with 28 hotels, eight are operational. The company explains that outbound markets such as Germany and the United Kingdom performed well in the Spanish islands and coasts until restrictions were increased, although the most stable destination has been Mexico thanks to the domestic market and arrivals from the USA. Nevertheless, the company’s sales plummeted by 60%, to 826 million.

The chain acknowledges that the fall in prices has been drastic in all destinations. «We know that demand exists and it has been demonstrated every time restrictions have been lifted. But right now we depend on vaccination both in our country and in our issuing markets, as well as on the control of transmission and the number of cases», they clarify. Looking ahead to Easter or summer, RIU warns that, for the moment, everything is at a standstill and the market is working more than ever with a minimum of anticipation.

Vincci: «We have to be agile in making decisions».

With 37 hotels in the world, Vincci has 16 open. In Spain it has 29 hotels, twelve of which are operational. The chain explains that for now corporate travel is the most stable segment, bringing together the essential trips to maintain business activity and reserving weekend stays for the local market, as leisure travel has been affected by the occasional restrictions that have been taking place.

As for the forecasts, with the current limitations on international movements, at Easter «any tourism, if there is any, will be national». As for the summer, they hope that «at least it will behave in a similar way to last year».

From Vincci they recognise that the expectations «are not too hopeful». «We are in a time of uncertainty. That is why for months now, we have had to be very agile when it comes to making decisions because everything changes almost immediately,» they say.

B&B: «We trust in national tourism for Easter».

B&B has 36 hotels in Spain and, apart from three specific exceptions (one hotel under construction and two temporarily closed), all are open. The group has more than 500 hotels in 12 countries.

Last year B&B managed to maintain a total occupancy rate of 43% in Spain, above the market average, and moderated the fall in Revpar (average revenue per available room). The chain explains that the hotels that have held up best have been those in secondary cities and some boutique hotels such as B&B Puerta del Sol or B&B Fuencarral 52.

«With the uncertainty of the pandemic, we anticipate that most bookings will be made at very short notice. In any case, we are confident that travellers will opt for national tourism at Easter», they add.

Despite Covid, the chain maintains its plan to open new establishments. «Our forecast for 2021 is to open seven in Spain and five in Portugal, making a total of 52 on the Iberian Peninsula».