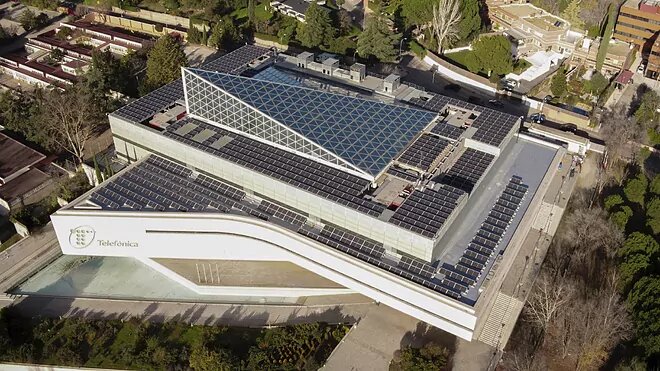 Movistar brings renewables to the heart of its network

The CNSO centre in Aravaca, Madrid, from which Telefónica’s entire network is monitored, is now more sustainable thanks to 600 photovoltaic panels. From there, the quality of service is monitored and any setbacks can be solved in real time.

Telefónica has taken another step towards its commitment to achieve zero net emissions by 2030 by converting the roof of its building in Aravaca (Madrid) into a large solar roof. The installation consists of 598 solar panels that will produce 420 MWh of clean energy each year, which is approximately one third of what the building itself needs during daylight hours. The building, one of Telefónica’s most emblematic in Madrid, is the National Supervision and Operation Centre (CNSO), inaugurated in November 1997 in the Madrid municipality of Aravaca on a project by the prestigious architect Rafael de la Hoz.

The solar panel installation project has been completed in record time and gives Telefónica a further boost towards a carbon neutral future, a commitment made by the company last year when it decided to bring forward its initial pledge by five years.

Telefónica is on the CDP (Carbon Disclosure Project) «A List» of companies leading the way towards a sustainable future. In 2019, the company already reported that 100% of the electricity consumed by Telefónica in Europe came from renewable sources and that it had achieved a 50% reduction in CO2 emissions worldwide, thus bringing it ahead of the company’s 2025 target.

The 261.3 kW installation at the CNSO just went online a few weeks ago and is expected to provide 420 MWh of clean solar energy per year. If sourced from fossil fuels, this amount of energy would otherwise produce 79.8 tonnes of CO2 emissions. With its 598 solar panels, the new installation will power the CNSO’s vital operations.

The installation is the work of the Madrid-based company Idna SL (Investigación y Desarrollo de Nuevas Alternativas). With more than twenty years of experience in the solar industry, Idna is the partner of the REC Group in Spain, which is the manufacturer of the solar panels.

The installation of the panels, at various heights, was carried out in record time – just three weeks elapsed between the first panel and the last – and the result, although not visible from the façade, can be seen «from a bird’s eye view».

Óscar Candiles, Director of Strategy at Telefónica España, points out that «sustainability is one of the basic pillars of Telefónica España’s strategic plan. Turning the CNSO into a real solar power plant gives an idea of our commitment to clean energy and digitalisation».