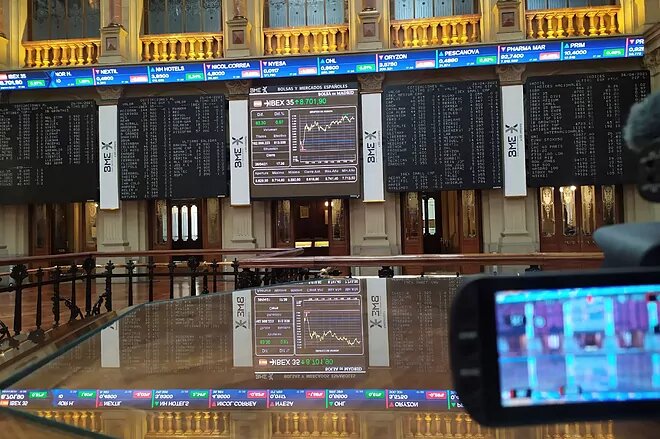 The Ibex reaches its highest level since March 2020, awaiting its results and the Fed.

The Spanish selective index has distanced itself from the falls suffered by the rest of the major European markets, with Santander, Siemens Gamesa and CaixaBank leading the gains. Wall Street lost ground in the first part of the session.

The avalanche of corporate results on both sides of the Atlantic complicates any attempt at a truce in the financial markets, although a large part of analysts’ attention is focused on the US Federal Reserve meeting. Today marks the first of two days of meetings, and it will be late tomorrow when its messages on the strength of the economic recovery and its determination to maintain all monetary stimuli despite the expected sharp improvement will be known.

The messages of patience launched by the Fed over the last few weeks have taken hold in the market, to the point of causing a notable containment in US debt interest rates, which until a month ago were one of the greatest threats to the markets. The interest rate on its ten-year bond is now below 1.6%, a far cry from the 1.77% recently reached in its climb. In Europe, bond yields also moderated slightly, with the German bund at around -0.25%, and the Spanish bond at +0.40% for another day.

Without additional pressure from debt interest rates, the main focus was on the avalanche of results in Asia, Europe and the United States. The benchmarks were mostly favourable, although the level of market demand after the rally accumulated in the last few months and the uncertainties arising from the increase in Covid infections in countries such as India and Japan have tipped the balance in favour of moderation, with small variations in Japan and China.

In Europe, the Ibex 35 has distanced itself from the falls suffered by the major European markets and has managed to rise 0.63% to 8,756.70 points. This is the Spanish selective index’s highest level since March 2020.

Banks, the main players in yesterday’s Ibex rises, await the resumption of their business results without losing sight of the references coming from Europe from entities such as HSBC and UBS. The sector continued yesterday’s gains, with Santander (+5.01%) as the most bullish stock of the day. Behind it, only Siemens Gamesa (+2.82%) was ahead of CaixaBank (+2.32%) and BBVA (+1.48%).

On the other hand, the stocks most closely linked to tourism have not been able to consolidate the gains they started the week with, thanks to the announcement of the upcoming reopening of transatlantic flights to Europe. IAG (-0.21%), with a 3.93% gain, was the most bullish stock in the Ibex, followed by Aena, Meliá (-0.66%) and Amadeus (-1.21%). Today, only the airport manager escaped the red, with a gain of 1.21%.

On the other hand, the Ibex’s best stock in 2021 has come under new pressure to halt its rise. Kepler analysts have repeated their forecasts of sharp falls in Fluidra, one of the star stocks on the Spanish stock market since the confinement. The swimming pool equipment company closed at 28.45 euros, a fall of 0.70%,

The rest of the European indices were unable to follow the Ibex’s lead. The French Cac and the Stoxx 600 were the closest to closing in positive territory, losing only 0.03% and 0.08%, respectively. The Italian Mib (-0.17%) and the German Dax (0.31%) also lost ground.

On Wall Street, the main indices of the New York Stock Exchange opened with slight declines. The Dow Jones fell by just over 0.1%, with 3M, Intel and Salesforce the worst performers. The S&P 500 has a similar performance, while the Nasdaq is in the red by 0.3%. Today the focus will be on the results of Alphabet and Microsoft, which will be released at the close of the market.

The companies most closely linked to oil prices are breathing a sigh of relief after a few days of major corrections due to the impact of Covid on demand in India, the world’s third largest importer of crude oil. Brent crude oil is trying to recover the 66 dollar level, while West Texas crude, the US benchmark, has reached 62 dollars.

The first of two days of the Fed meeting brings a timid reaction from the dollar, which has deflated in recent weeks in line with the retreat in interest rates on US debt. The euro dipped below 1.21 dollars today and the pound eased to levels below 1.39 dollars.

The bitcoin price is rebounding in strength. In its fall, it had fallen as much as 25% from its recent highs, below the $50,000 barrier. In yesterday’s session it had already consolidated above this level, and today it is extending its rebound to 55,000 dollars. The gold ounce, on the other hand, lost $1,800.