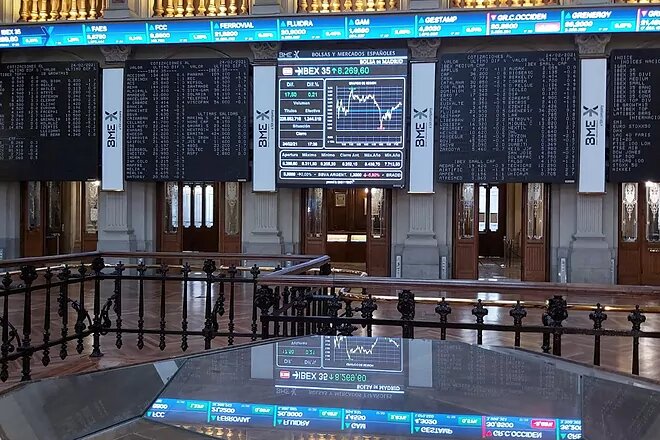 The Ibex resumes its upward climb with the debt truce.

March begins with a resurgence of optimism. The truce in debt interest rates opens the door to a generalised rebound that could bring the Ibex close to 8,300 points.

The markets managed to halt the correction suffered at the end of last week, when the rise in debt interest rates triggered profit-taking, especially in the United States and Asia. Alerts were triggered when interest on the ten-year US bond accelerated its rally to a one-year high of 1.61%. With investment firms scrambling to identify critical levels for stock markets, the bond market takes a notable breather at the start of the week and month.

The sell-off in US debt gave way to a sharp rebound in its price, with the required yield deflating to around 1.40%, well below the 1.61% reached at the end of last week. The brake on the rise in debt interest rates has also reached Europe, albeit more moderately. The interest rate on the German bund is close to -0.30%, while the yield demanded on the Spanish ten-year bond is moderating below 0.40%.

The retreat in financing costs is smoothing the prospects for economic recovery, encouraged by vaccines and the trillion-dollar stimulus. Vaccines in particular could provide further support to the financial markets this week if forecasts are met and the vaccine developed by Johnson & Johnson is approved imminently.

The first reports of the day, from Asia, have accelerated the rebound in the markets. Last Friday’s falls of more than 3% on average gave way today to a rebound of 2.41% in Tokyo’s Nikkei. In China, the CSI 300 index rose by 1.54%.

Wall Street’s futures are up, a bullish sign that is repeated in Europe. The Spanish stock market has a clear path to recover a good part of the 1.12% lost last Friday. Despite this final setback, the Ibex managed to close February with gains of 6%. Today’s advances, with no results among the members of the selective index, push the Ibex towards around 8,300 points.

The rest of the European stock markets are also taking advantage of the debt truce to recover a good part of what was lost last Friday. Macro data today should confirm the acceleration in manufacturing activity in the euro zone, while awaiting the most awaited macro reference of the week, the US employment report to be released on Friday.

Optimism about the economic recovery is also reflected in the outlook for crude oil demand. The result is a new acceleration in oil prices. Brent crude rises to 65 dollars a barrel and West Texas crude, the US benchmark, to 62 dollars.

The bearish wave unleashed at the end of last week triggered the dollar’s rally. The US currency is once again showing signs of weakness today in the face of the general improvement in the markets. The euro is close to 1.21 dollars and the pound is back near the 1.40 dollar level.